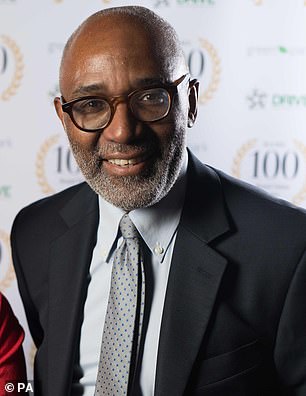 Trevor Phillips says that Oprah should have asked Harry and Meghan about the prince’s own past behaviour that could be considered racially insensitive.

The Monarchy has been plunged into crisis following the Duke and Duchess of Sussexes’ accusation of racism – a claim that Harry’s brother Prince William has today strongly denied.

Buckingham Palace is struggling to quiet criticism after Harry and Meghan alleged that the duchess was the victim of racism and callous treatment during her time as a working member of the royal family.

The palace tried to respond to the charges, made during an interview with US TV host Oprah Winfrey, with a 61-word statement that critics called ‘too little, too late.’

But in 2005, a young Harry had caused a stir himself when, at just 20 years old, he dressed up for a party in a Nazi uniform, complete with swastika armband, sparking condemnation from politicians and Jewish human rights organisations.

After pictures of the outfit were published, an apology was issued on behalf of Harry for his ‘poor choice of costume’.

In 2006 Prince Harry was recorded calling an Asian army colleague a ‘P**i’ – and the footage was published three years later. The prince apologised for any offence caused by the incident.

Now Charles Moore, former editor of the Daily Telegraph, reveals that writer and former politician Mr Phillips contacted him to give an opinion on the incendiary Oprah interview.

Writing for his diary in The Spectator, Mr Moore quotes the email from Mr Phillips, who says: ‘A genuinely interesting question about race would have been to ask the couple whether they had discussed Harry’s own past behaviour and remarks. 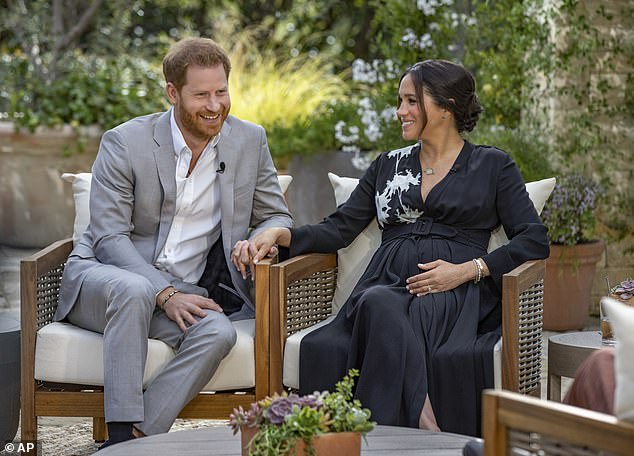 During the bombshell interview, Harry accused an unnamed member of his family of racism and said the lack of support he and his wife received from the other royals was behind their decision to quit the UK

Prince Harry was forced to issue a grovelling apology in 2005 after wearing a Nazi uniform to a party.

His choice of outfit was condemned as insensitive and tasteless by shocked Holocaust survivors.

And the Queen’s grandson wearing an Afrika Korps uniform caused a crisis for the Royal Family.

Former royal press officer Dickie Arbiter urged him to say sorry publicly on radio or television. He told the BBC: ‘It is just not good enough to behave like that. We all know history, and at 20 there is no excuse.’

In 2012 the prince faced fresh accusations of bringing the royal household into global disrepute.

Harry was photographed on a mobile phone in just a necklace with a naked female playmate hiding behind him having played a game of strip pool in his VIP Las Vegas suite. Another showed him giving the same topless woman a naked bear hug, which have since been seen by tens of millions across the world.

As well as the embarrassment, it did raise security fears about how well the prince was protected on his Vegas trip.

‘It would’ve been a big positive for them to talk candidly about how they got past that history, and possibly an injunction for people to be generous.’

Mr Moore then gives his own opinion: ‘Yes, Harry could have helped young white men trying to tiptoe through this minefield.’

Mr Phillips adds: ‘That’s assuming that Meghan actually knows about his past life — she seems remarkably ill-informed about the family she married into, even though it is the most famous and widely reported clan in history.’

Meghan said in the Oprah interview that she was so isolated and miserable as a working member of the royal family that she had suicidal thoughts.

She also said Harry told her that member of the royal family had expressed ‘concerns’ about the color of her baby´s skin before the birth of their son, Archie.

An impassioned Prince William today publicly hit back against Harry and Meghan’s racism claims, insisting, ‘We’re very much not a racist family’.

The Duke of Cambridge is the first royal to personally respond to the allegation during his first royal engagement since the Oprah interview, as he also revealed that he has not spoken to his brother since it came out but ‘will do’.

Meghan’s claim that an unnamed royal raised concerns about Archie being ‘too brown’ was the most damaging allegation to come out of the broadcast, and caused untold damage to the Windsors’ reputation around the world.

Today was also the first engagement for Kate since she was accused by Meghan of making her cry in the bombshell tell-all chat.

During the Oprah interview, Meghan also revealed details about their strained relationship, saying of pictures of them laughing at Wimbledon, ‘Nothing is what it looks like’, and said Kate being called ‘waity Katie’ in the press couldn’t compare to the alleged racism she faced.

Meanwhile, Harry revealed how he was ‘on different paths’ to William and spoke about his brother was ‘trapped’ in the Royal Family.

William, who was visiting School2 in east London to promote a children’s mental health programme, defended his family’s reputation after being asked by Sky News reporter Inzamam Rashid, ‘Is the Royal Family a racist family?’

And when questioned whether he had spoken to his brother since Sunday’s broadcast, the Duke of Cambridge said: ‘No, I haven’t spoken to him yet but I will do.’ 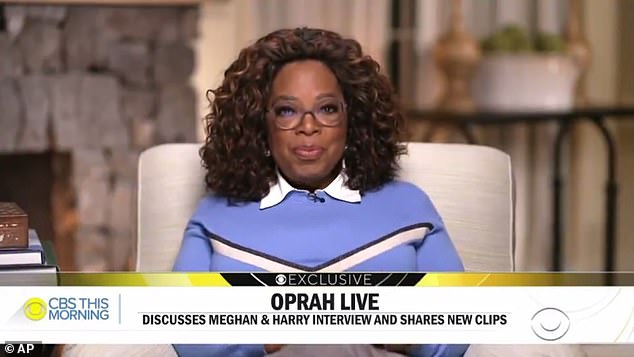 Oprah Winfrey discusses her interview with Prince Harry and Meghan, Duchess of Sussex 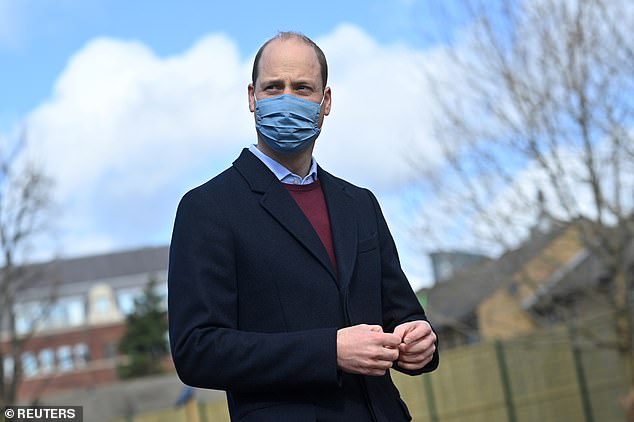 William, who was visiting School2 in east London to promote a children’s mental health programme, defended his family’s reputation after being asked by Sky News reporter Inzamam Rashid, ‘Is the Royal Family a racist family?’ 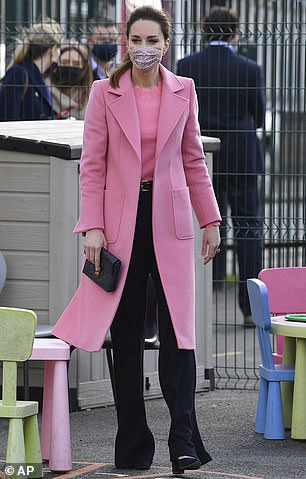 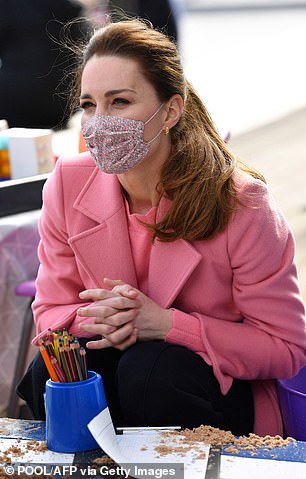 William and Kate (pictured) signalled their intention to carry on as normal at School21 in Stratford, east London, with Kate seen speaking to pupils and teachers 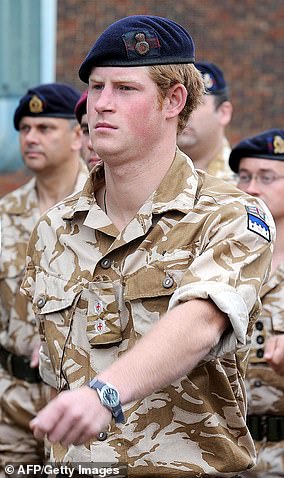 In 2009 Prince Harry apologized after footage was published that showed him calling an Asian army colleague a ‘P**i’.

Harry said he had used the term without malice after the recording, taken in 2006, was released.

It took place a year after Harry was pilloried for wearing a Nazi uniform at a costume party, a gaffe that sparked an international outcry.

Harry was sent on an Army diversity course after the incident, where he referred to Ahmed Raza Khan as ‘our little P**i’ friend.

The prince apologised for any offence caused by the incident and Captain Khan, who was serving in the Pakistan army, insisted he took no offence, contemporary reports said.

A source close to the prince at the time had said he was willing to take his punishment ‘on the chin’ but stressed: ‘Harry doesn’t have a racist bone in his body.

‘The only thing he is guilty of is speaking without thinking and trying to be one of the lads.’

A spokesman at the prince’s office in St James’s Palace said: ‘Prince Harry has been subjected to normal Army disciplinary procedures like any other officer.’

A senior royal source had added: ‘His disciplinary hearing happened a couple of weeks ago. As far as we are concerned the matter is closed.’