Trump fatigue: Are Americans turning the channel on Donald’s show?

Washington: Despite his repeated attacks on journalists as "fake news" and the "enemy of the people", Donald Trump has in many ways been a gift to the media.

"It may not be good for America, but it's damn good for CBS," Leslie Moonves, the former chairman of CBS, one of America's main broadcast networks, famously said during Trump's rise to the top of the Republican primary field in 2016. 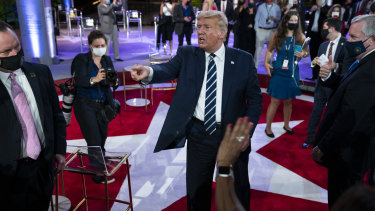 President Donald Trump talks with voters after his town hall in Miami.Credit:AP

In 2018 Jeff Zucker, the head of CNN, defended the network's near constant focus on Trump: "We’ve seen that anytime you break away from the Trump story and cover other events in this era, the audience goes away. So we know that, right now, Donald Trump dominates."

Newspapers such as The New York Times and The Washington Post received a surge in subscriptions following Trump's victory, a phenomenon known as the "Trump bump".

So when NBC scheduled a town hall with Trump at exactly the same time as an event with Democratic rival Joe Biden on ABC, many Democrats were furious. Surely, they thought, more Americans would tune in to watch the volatile and norm-shattering President rather than the man Trump belittles as "Sleepy Joe". This would deprive Biden of a chance to promote his agenda and allow Trump to crow about a ratings win.

"This will be good for Trump because people like to watch his unpredictability," prominent TV personality Katie Couric said on Twitter of the duelling town halls. "This is a bad decision."

It turns out they needn't have worried. To widespread surprise, Biden's town hall won the battle for viewers. America's first reality TV president, it seems, is no longer ratings gold.

Biden's ABC town hall averaged 14.1 million viewers, compared to 13.5 million for Trump’s. That's particularly notable given the Biden event was broadcast on just one network. Trump's figure includes those who tuned in on NBC affiliates MSNBC and CNBC as well as the main channel.

Rather than Trump, it was the Biden campaign gloating on Twitter. "Turns out more people last night were interested in watching a leader with a clear plan to get this pandemic under control and Americans back to work, than the same combative, chaotic liar whose incompetence got us into this mess – regardless of how many channels he was on," tweeted Biden's press secretary TJ Ducklo.

Ratings, of course, don't equal votes and this was just one night of television. But it points to one of the most fundamental questions playing out in this election: after four years of non-stop drama, are Americans tired of the Trump show?

While Trump's hardcore supporters remain highly energised by his presidency, it's not hard to find examples of "Trump fatigue" as you travel around the US. Many Americans pine for the days when politics didn't dominate daily life so much, when you could talk about sport or movies with your neighbours without it turning into a political debate.

"Its exhausting," Robin Shaw, a lifelong Republican in Arizona who plans to vote for Biden, told The Sydney Morning Herald and The Age during a recent visit there. "Everyone I talk to is fed up. We're tired."

Biden – who is campaigning on a return to normalcy, decency and competence – is banking on this sentiment to carry him over the line on November 3.