Trump signed four executive orders related to what he called ‘China virus relief’ during a press conference at his golf resort in Bedminster, New Jersey, on Saturday afternoon.

It came hours after the White House signaled that Washington’s gridlock had compelled him to act as the pandemic undermined the country’s economy and the November election nears.

Trump had threatened to bypass elected lawmakers during a briefing on Friday night, saying: ‘If Democrats continue to hold this critical relief hostage I will act under my authority as president to get Americans the relief they need.’

The president turned his official event on Saturday into a semi-political rally, launching broadsides against Democratic rival Joe Biden and the news media as members of his Bedminster golf club laughed at his attack lines.

Doubling down on his strikes against congressional Democrats, Trump accused them of blocking a compromise deal on relief because they want ‘bailout money for states that have been badly managed for many years’.

‘Many of the far-left policies they’re pushing have nothing to do with the corona,’ Trump said.

The four executive orders include:

The sweeping moves raised legal questions about the president’s authority to take such steps, as Congress has the sole power to tax and appropriate funds. However, the orders claim powers under the national emergency declared in March in response to the pandemic.

Trump first announced an order that would allow employers to defer payroll tax through the end of the year.

The second order included a freeze on evictions that will allow hard-hit renters to remain in their homes even if they can’t afford payments.

A third order, perhaps the most crucial, will extend the unemployment benefits that have run out, offering people an additional $400 per week – down from the $600 that was part of the relief package that expired this month.

‘It’s $400 a week, and we’re doing it without the Democrats,’ Trump said, asking states to cover 25 percent of the cost. It was not immediately clear where the federal portion would come from – though the president suggested he was looking to use unspent funds from previous coronavirus relief bills – and Trump said it would be up to states to determine how much, if any of it to fund.

Trump remarked that there should never have been an issue in coming to a benefits deal with Democrats, who had wanted to renew the original $600 a week.

Republicans originally proposed $200 a week and then upped their offer to $400, but Democrats still said it wasn’t enough. This was one of the major areas of difference that held up getting a legislative deal.

Asked if the reduction in supplemental benefits to $400 would be a ‘hardship’ for the millions currently eligible, Trump replied: ‘Well no, it’s not a hardship, this is the money that they need this is the money they want and this gives them a great incentive to go back to work.’

‘And as you know they were different there was difficulty with the $600 number, because it really was a disincentive,’ he added, referring to the fact that the $600 federal supplement put total average unemployment benefits higher than the average wages in more than 30 states.

The fourth and final order will extend the suspension of student loan payments through the end of the year.

Of the new orders, Trump said: ‘We didn’t think we would have to [take executive action] but Democrats have been unreasonable. Not just unreasonable, ridiculous.’ 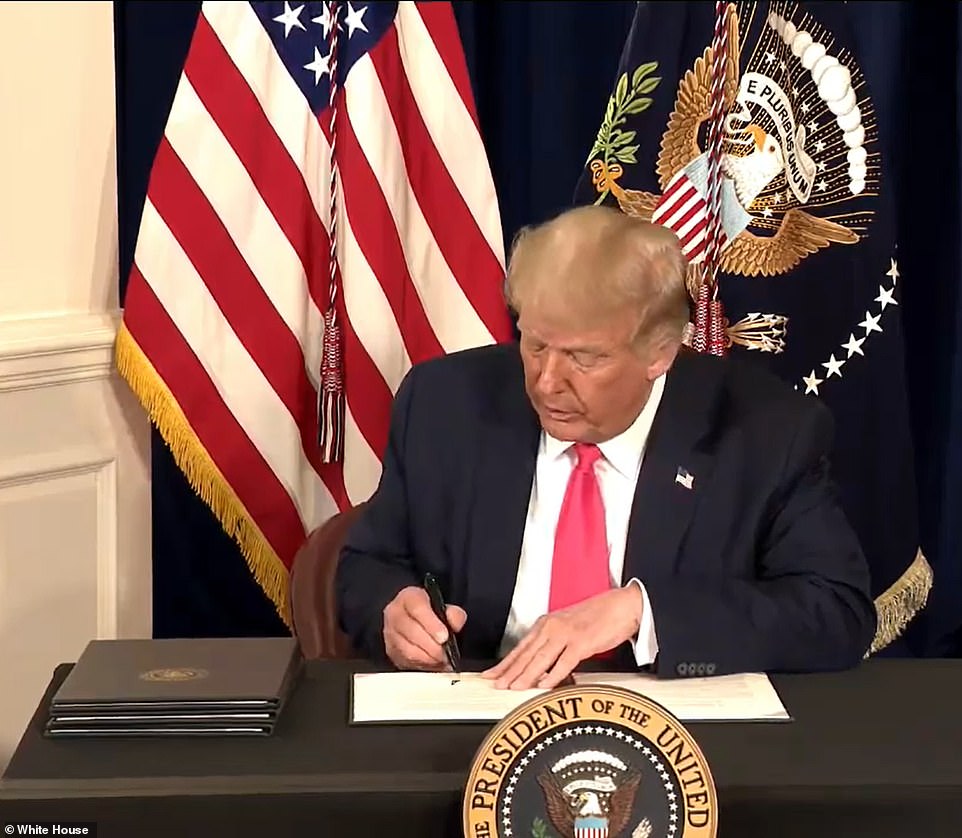 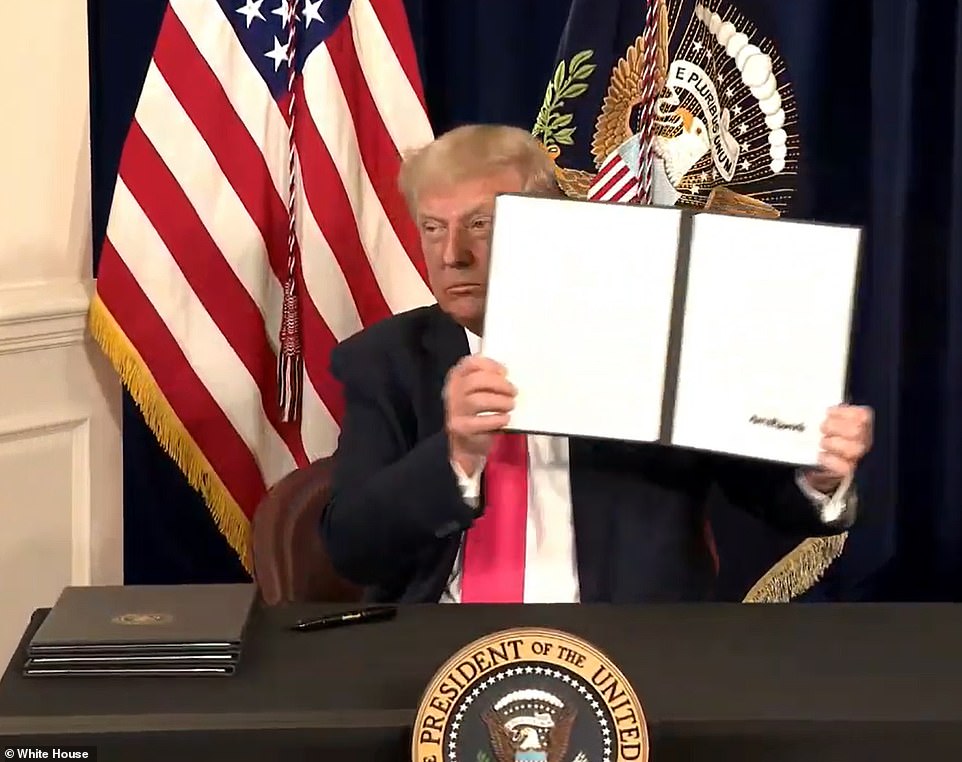 Up until now, Trump has largely stayed on the sidelines during his administration’s negotiations with congressional leaders.

The talks, which broke down in recent days, were led on his side by chief of staff Mark Meadows and Treasury Secretary Steve Mnuchin.

Democrats had said they would lower their spending demands from $3.4trillion to $2trillion but said the White House needed to increase their offer. Republicans have proposed a $1trillion plan.

White House aides have watched the talks break down with apprehension, fearful that failure to close a deal could further damage an economic recovery already showing signs of slowing down.

Friday’s jobs report, though it beat expectations, was smaller than the past two months, in part because a resurgence of the virus has led to states rolling back their reopenings.

The president’s team believes the economy needs to stabilize and show signs of growth for him to have any chance at winning reelection.

Aides were hoping to frame the expected executive orders signings as a sign that Trump was taking action in a time of crisis.

But it also would reinforce the view that the president, who took office declaring he was a dealmaker, was unable to steer the process to an agreement.

Also, the anticipated orders would be smaller in scope than congressional legislation.

‘This is not a perfect answer – we´ll be the first ones to say that,’ Meadows said Friday as talks broke down.

‘But it is all that we can do and all the president can do within the confines of his executive power, and we´re going to encourage him to do it.’ 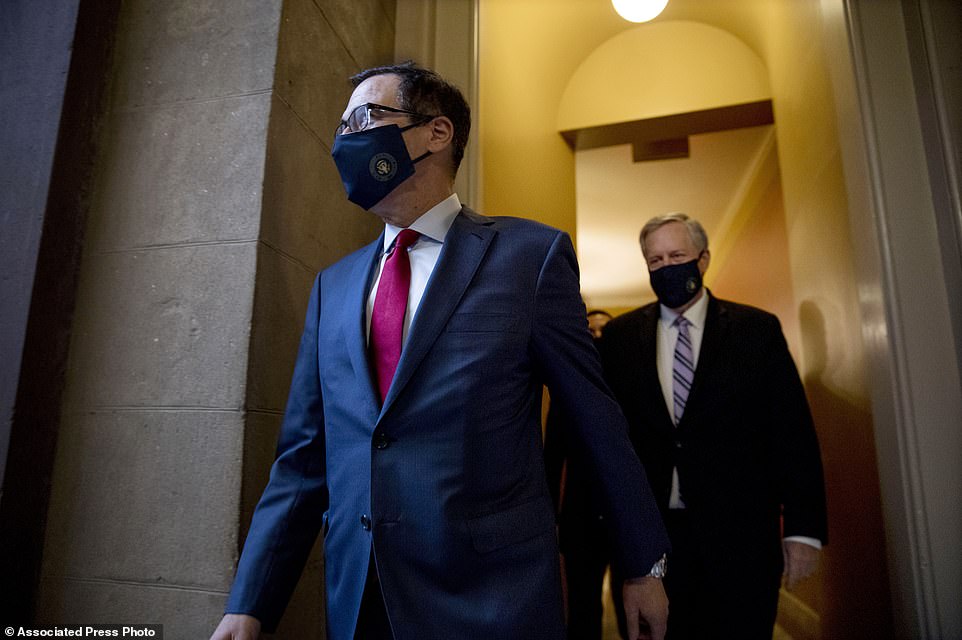 Trump has not specified how the payroll tax deferral would work, and it was unclear whether he had the authority to take such an action without approval from Congress.

The move would not aid unemployed workers, who do not pay the tax when they are jobless, and would face bipartisan opposition in Congress.

The cut, long a Trump wish, would affect payroll taxes that are intended to cover Medicare and Social Security benefits and take 7 percent of an employee´s income. Employers also pay 7.65 percent of their payrolls into the funds.

Both the House and Senate have left Washington, with members sent home on instructions to be ready to return for a vote on an agreement.

With no deal in sight, their absence raised the possibility of a prolonged stalemate that stretches well into August and even September.

Often an impasse in Washington is of little consequence for the public – but not so this time.

It would mean more hardship for millions of people who are losing enhanced jobless benefits and further damage for an economy pummeled by the still-raging coronavirus.

Friday´s negotiations at the Capitol added up to only ‘a disappointing meeting,’ said Senate Democratic leader Chuck Schumer of New York.

He said the White House had rejected an offer by House Speaker Nancy Pelosi (D – California) to curb Democratic demands by about $1trillion.

Schumer urged the White House to ‘negotiate with Democrats and meet us in the middle. Don’t say it’s your way or no way.’

That Capitol Hill session followed a combative meeting Thursday evening that for the first time cast real doubt on the ability of the Trump administration and Democrats to come together on a fifth COVID-19 response bill.

Pelosi declared the talks all but dead until Meadows and Mnuchin give ground.

The breakdown in the negotiations is particularly distressing for schools, which have been counting on billions of dollars from Washington to help with the costs of reopening.

But other priorities are also languishing, including a fresh round of $1,200 direct payments to most people, a cash infusion for the struggling Postal Service and money to help states hold elections in November.

Mnuchin said renewal of a $600 per-week pandemic jobless boost and huge demands by Democrats for aid to state and local governments are the key areas where they are stuck.

Democrats have offered to reduce her almost $1trillion demand for state and local governments considerably, but some of Pelosi’s proposed cost savings would accrue chiefly because she would shorten the timeframe for benefits like food stamps.

Pelosi and Schumer continue to insist on a huge aid package to address a surge in cases and deaths, double-digit joblessness and the threat of poverty for millions of the newly unemployed.

Senate Republicans have been split, with roughly half of Majority Leader Mitch McConnell’s rank and file opposed to another rescue bill at all.

Four prior coronavirus response bills totaling almost $3trillion have won approval on bipartisan votes despite intense wrangling, but conservatives have recoiled at the prospect of another Pelosi-brokered agreement with a whopping deficit-financed cost.

McConnell has kept his distance from the negotiations while coordinating with Mnuchin and Meadows.