Washington: The Supreme Court on Friday rejected an audacious lawsuit by Texas that had asked the court to throw out the presidential election results in four battleground states captured by President-elect Joe Biden.

The court, in a brief unsigned order, said Texas lacked standing to pursue the case, saying it "has not demonstrated a judicially cognisable interest in the manner in which another state conducts its elections".

The move, coupled with a one-sentence order on Tuesday turning away a similar request from Pennsylvania Republicans, signalled that the court has refused to be drawn into President Donald Trump's losing campaign to overturn the results of the election last month. 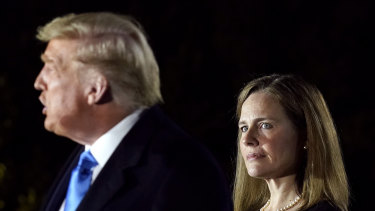 "I think this will end up in the Supreme Court," Trump said of the election a few days after Justice Ruth Bader Ginsburg's death in September. "And I think it's very important that we have nine justices."

In the Texas case, the Supreme Court received more than a dozen friend-of-the-court briefs and motions seeking to intervene, from Trump, from coalitions of liberal and conservative states, from politicians and from scholars.

Among them was a brief filed by more than 100 House Republicans who claimed that the general election — the same one in which most of them were reelected — had been "riddled with an unprecedented number of serious allegations of fraud and irregularities". More than a dozen Republican state attorneys general expressed similar support on Wednesday.

Legal experts almost universally dismissed Texas' suit as an unbecoming stunt. In invoking the Supreme Court's "original jurisdiction," Texas asked the justices to act as a trial court to settle a dispute between states, a procedure theoretically possible under the Constitution but employed sparingly, typically in cases concerning water rights or boundary disputes.

In a series of briefs filed Thursday, the four states that Texas sought to sue condemned the effort. "The court should not abide this seditious abuse of the judicial process, and should send a clear and unmistakable signal that such abuse must never be replicated," a brief for Pennsylvania said.

On Friday morning, Texas' attorney general, Ken Paxton, responded in a reply brief. "Whatever Pennsylvania's definition of sedition," he wrote, "moving this court to cure grave threats to Texas' right of suffrage in the Senate and its citizens' rights of suffrage in presidential elections upholds the Constitution, which is the very opposite of sedition."

Claims that the election was tainted by widespread fraud have been debunked, including by Attorney General William Barr, who said this month that the Justice Department had uncovered no voting fraud "on a scale that could have effected a different outcome in the election".

Some 20 states led by Democrats, in a brief supporting the four battleground states, urged the Supreme Court "to reject Texas' last-minute attempt to throw out the results of an election decided by the people and securely overseen and certified by its sister states".

Georgia, which Biden won by less than 12,000 votes out of nearly 5 million cast, said in its brief that it had handled its election with integrity and care. "This election cycle," the brief said, "Georgia did what the Constitution empowered it to do: It implemented processes for the election, administered the election in the face of logistical challenges brought on by COVID-19, and confirmed and certified the election results — again and again and again. Yet Texas has sued Georgia anyway."