The United States has recorded its deadliest day in the coronavirus pandemic, with another 540 deaths taking its fatalities past 3,000, as the World Bank warned that economic fallout could drive large parts of East Asia into poverty.

In a symbolic moment in the fight against the pandemic, the US navy hospital ship Comfort sailed down the Hudson into Manhattan on Monday, to the relief of cheering onlookers on New York and New Jersey’s river banks. The converted oil tanker passed the Statue of Liberty, accompanied by support ships and helicopters, with giant red crosses painted on its white hull.

“It’s a war-time atmosphere and we all have to pull together,” said New York City mayor Bill de Blasio, who was among the dignitaries to greet the ship’s arrival at the Midtown Manhattan pier. 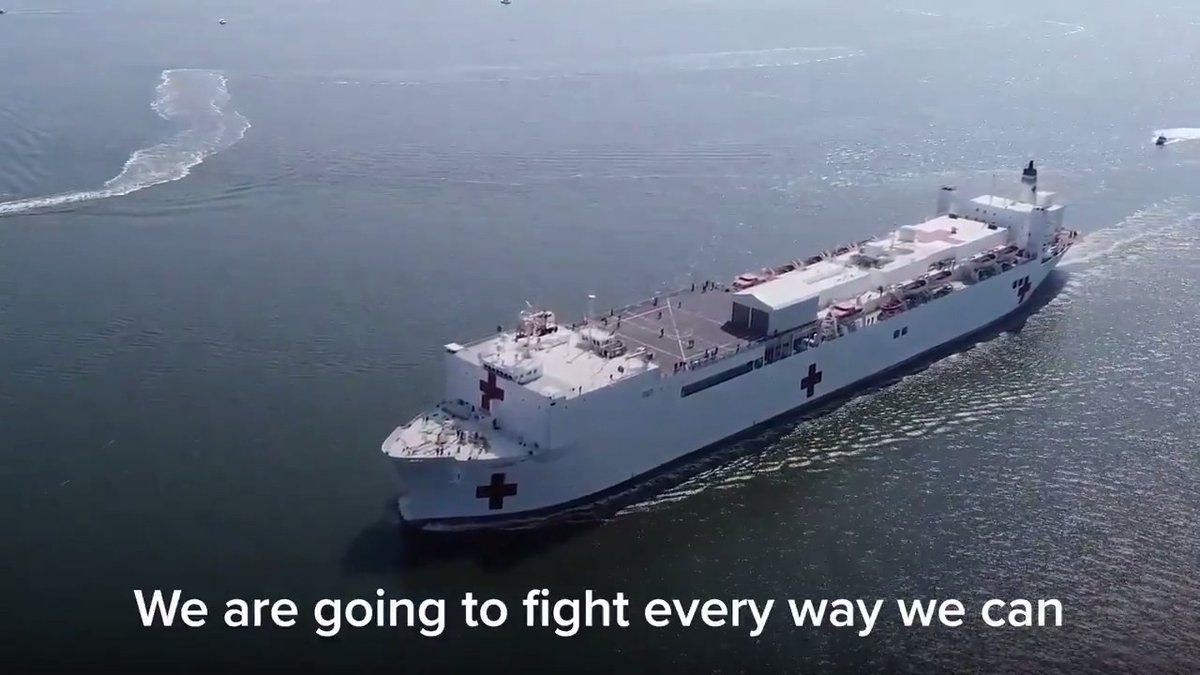 The ship’s 1,000 beds will treat non-coronavirus patients, including those who require surgery and critical care, in an effort to free up other medical resources. In the city’s famous Central Park, a field hospital of white tents with 68 beds, will begin taking patients on Tuesday, according to de Blasio.

But few Americans will take solace from the statistics. On Monday, at least 540 deaths were recorded from Covid-19, taking the death toll to 3,040, according to Johns Hopkins University’s tracker, with just under 165,000 infections. Of those deaths, just under a third were in New York City (914). 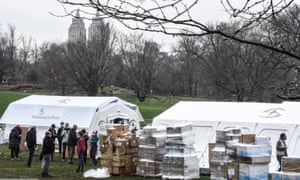 President Trump’s daily news conference featured hand-picked captains of industry praising is efforts to tackle the virus, while reporters were again chastised for asking hard questions. CNN’s Jim Acosta quoted the president’s own assertion that the virus was “very much under control”, to which Trump responded: “It’s almost a miracle the way it’s all come together, and instead of asking a nasty, snarky question like that, you should ask a real question.”

In China, the city of Wuhan – where the virus began – reported its seventh day in a row with no new cases, according to the country’s National Health Commission. The commission says there have been 81,518 recorded cases of Covid-19 in China, 76,052 recoveries, and 3,305 deaths. According to the commission, there are now just 2,161 across the country, with all 48 new cases recorded on Tuesday, coming from abroad.

Despite this, World Bank said the pandemic was causing “an unprecedented global shock, which could bring growth to a halt and could increase poverty across the region,” according to the bank’s east Asia and the Pacific economist, Aaditya Mattoo. Even in the best-case scenario, the region could see a sharp drop in growth, with China’s expansion slowing to 2.3% from 6.1% in 2019, the report said.

Chinese state media reported that factory activity rebounded in March, with the Purchasing Managers’ Index, a key gauge of manufacturing activity, coming in at 52.0. This was higher than the 44.8 analysts expected in a Bloomberg survey, and up from 35.7 in February, which was the worst month since China began recording the data in 2005. A reading above 50 suggests growth in the sector.

But China’s international trade in services dropped 11.6% in January and February, with imports and exports of tourism services plunging 23.1%, citing the commerce ministry.

Elsewhere in east Asia,, there were concerns over a rise in cases in the Japanese capital Tokyo. But a government spokesman dismissed calls for the prime minister, Shinzo Abe, to declare a state of emergency. The country’s economics minister warned that shutdowns in cities such as Tokyo or Osaka could have huge consequences on the world’s third largest economy.

In South Korea, which has been hailed for its rigorous testing program, it was announced that schools would open online classes next week, after a delayed start to the term. After a big early outbreak, the country’s daily new cases have fallen to around 100 or less, but infections from small clusters including churches, hospitals and nursing homes, as well as imported cases, continue to arise. Total infections stand at just under 10,000, with 162 deaths.