London: A bitter row which threatens to disrupt vaccine shipments to Australia has morphed into a post-Brexit stand-off, with European Union officials demanding immediate delivery of tens of millions of doses manufactured in Britain.

The salvo was a new escalation in a dispute between the EU and Pfizer and AstraZeneca triggered by revelations the pharmaceutical giants were unable to supply the bloc with as many vials as first agreed. 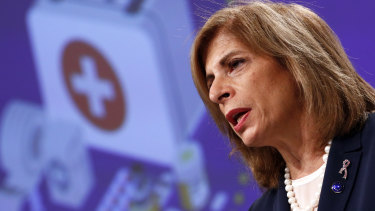 The EU has already slapped export controls on vaccines produced within their territory in a move designed to force pharmaceutical companies Pfizer and AstraZeneca into reserving more doses for the bloc.

The new requirement, which effectively means producers must ask for permission before shipping vials outside the region, will at the very least slow the distribution process.

Some MPs want the European Commission to go even further and deny approval for vaccines to leave the region for third countries like Australia.

Australia has ordered 10 million doses of the Pfizer vaccine, which is being manufactured in Belgium. The first shipment of at least 80,000 doses is due by the end of February.

Australia is also expecting 1.2 million doses of the AstraZeneca vaccine from Europe, while manufacturing of that vaccine ramps up in Melbourne. That number has already been revised down from the previously expected 3.8 million due to the global supply problems.

Pfizer and AstraZeneca have blamed production issues for their inability to meet first quarter delivery volumes. The latter is expected to cut its projected supplies to the EU by as much as 60 per cent.

In an interview with Italian newspaper La Repubblica, AstraZeneca chief executive Pascal Soriot said its contracts with the EU were based on a “best effort” clause and dismissed the threat of legal action against the company.

“The contract with the UK was signed first and the UK, of course, said ‘you supply us first’, and this is fair enough,” he said.

Soriot apologised for the delays but said European leaders were under pressure and “emotional”.

He said claims by EU figures that the company was selling to other countries to make more money was “not right” because it has agreed to manufacture the vaccine at cost for the duration of the pandemic under an agreement with its development partner the University of Oxford.

Soriot’s interview was seen as a demolition of many of the EU’s claims and insight into the bloc’s vaccine procurement failures.

He also said vaccines for Europe would only be produced at plants in the Netherlands, Belgium, Italy and Germany.

The EU denied this and said AstraZeneca was under a contractual commitment to use vaccines made in British plants to meet agreed delivery volumes in Europe.

Kyriakides challenged AstraZeneca to agree to have the contract between both parties released publicly.

British Prime Minister Boris Johnson said he was confident the UK’s supplies would not be affected by the dispute but would not say how he would respond should AstraZeneca send vials to Europe.

A spokesman for Australian Health Minister Greg Hunt said the country was in a “strong position” because of its deal to manufacture 50 million doses of the AstraZeneca product in Melbourne.