Vaccine vacations: See the sights, get the jabs as Bali reopens

Singapore: A couple of needles in the arm may not be everyone’s idea of an ideal getaway but Indonesia has unveiled a vaccination holiday scheme that it hopes will draw more tourists back to Bali.

While Indonesia has just endured its worst week of the pandemic in terms of new and active cases of the virus, Bali has been pressing ahead with plans for the province to begin welcoming foreigners again by the end of July. 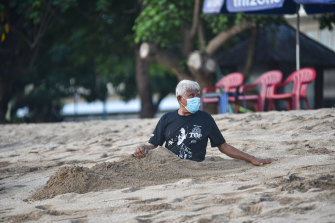 The beaches of Bali have been emptied by the pandemic. Credit:Getty

President Joko Widodo, known as Jokowi, must still sign off on Bali’s re-opening and there are indications it may be delayed, with Tourism Minister Sandiaga Uno telling Reuters that Indonesia “will be waiting for the situation to be more conducive”.

But after prioritising vaccination on the island in a bid to re-boot its tourism-reliant economy, Joko’s government is now set to use the lure of a jab as another reason for people to return there.

In announcing the program, Uno said the idea had come from Joko, who was on Tuesday discussing the ramping up of movement restrictions across the country after so far resisting a nationwide lockdown.

“I have received a lot of WhatsApp messages from interested friends and big data monitoring shows the enthusiasm of the community to get vaccines as well as take a vacation,” Uno said.

“Why do we have to go abroad for vacations? Why not just go to Bali?

“I can state that our vaccine supply is sufficient and Bali is the president’s priority. So this will not reduce Bali’s vaccine supply of 6 million doses.”

China’s Sinovac, the primary vaccine being used in the archipelago, would be given free to Indonesians travelling to Bali in the scheme and foreigners would be charged a fee, he said. Pfizer, Moderna and Novavax would also be considered, supply permitting. The vaccine visits would last for 14 days so tourists could have two shots – one on the day they arrive and the other on the day they leave – while people flying to Bali will now need COVID tests.

Indonesia is not the first country to try vaccine tourism. The United States has encouraged visitors from abroad to travel there for shots as part of tour packages and the Maldives, the United Arab Emirates, Russia and the US territory of Guam also want to jump on the bandwagon.

But Bali is recording its highest COVID-19 numbers since April and densely populated Java is bearing the brunt of the Delta variant in a surge which has pushed health facilities to breaking point. 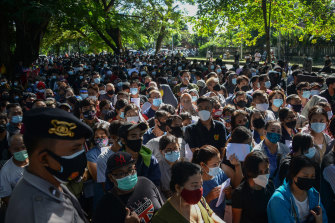 People gather in Denpasar this week to register for the AstraZeneca vaccine.Credit:Getty

“This idea copies the one in the US. But we are just copying without having the same condition,” said Dr Windhu Purnomo, an epidemiologist from Airlangga University in Surabaya.

“The COVID-19 condition in the US has gone down significantly … it is relatively safe. And the vaccination coverage is around 50 per cent. But in Indonesia, the ones with complete doses have only reached 6 per cent. It is still far from the target. Moreover, the epidemiology situation in Indonesia including in Bali is surging. I think this is ridiculous.”

“If I say it is not safe they will do it anyway, so I’d better say let’s be more careful so the PCR testing [before going to Bali] is carried out well,” he said.

Of Indonesia’s official tally of 20,694 new cases on Monday, there were 212 new infections reported in Bali, although experts have said low testing rates mean the true figures would be higher.

However, Bali Governor Wayan Koster said that residents in the three “green zone” areas reserved for isolating travellers for five days upon arrival – Ubud, Sanur and Nusa Dua – had been fully vaccinated.

Bali also plans to vaccinate 70 per cent of its population of 4.3 million people by the time it reopens to international visitors. Governor Wayan said he hoped that would not be postponed but Uno told Reuters new cases would have to drop to 30 or 40 per day before Bali was reopened to foreign tourists.

The island’s economy has been crushed during the pandemic, contracting by 11 per cent or more in the last three quarters of 2020 and by 9.85 per cent in the first quarter of 2021.

Bali had 6.27 million international arrivals in 2019, the last full year before the pandemic, including 1.23 million Australians. Last year, there were 1.05 million, most in the few months before the virus properly set in.

Erwin Soerjadi, a team member of the vaccine tourism project, said the vaccine holidays would initially only be available Indonesians via three appointed travel agents.

“This is a public-private partnership. We don’t use the state budget for this,” he said. “The initiative is purely coming from the private sector to revive Bali.”