Melbourne infectious diseases physician Michelle Ananda-Rajah said until vaccine uptake rose substantially, testing remained the most critical measure in Victoria alongside contact tracing to avoid another mass outbreak, but she feared “coronavirus fatigue” was leading to a drop in testing numbers. 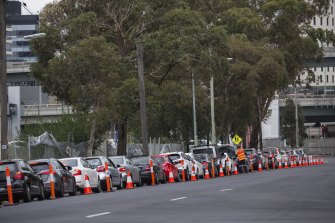 The queue for a COVID-19 test at Normanby Street in South Melbourne on Wednesday.Credit:Paul Jeffers

Mr Weimar revealed at the weekend he believed there were still undetected cases circulating in the community that could “linger and build” if they aren’t flushed out – a task requiring at least 20,000 tests a day to keep abreast of transmission in the population.

Dr Ananda-Rajah also suspects the virus is still bubbling away undetected at low levels in Melbourne, a view supported by the several missing epidemiological links between infected people.

“We know we haven’t unearthed all the cases yet,” she said. “A combination of factors have led to this. Firstly, we are not doing enough testing because we are falling below the 20,000 threshold and secondly, people in Victoria are extremely fatigued. They are fed-up by coronavirus and there is dangerous complacency where people who are slightly symptomatic are just not coming forward for testing.”

Dr Ananda-Rajah said to increase testing, health authorities needed novel measures. She suggested wastewater surveillance could be used as a trigger to deploy thousands of rapid antigen and saliva tests to suburbs deemed hotspots so people could quickly test themselves at home.

However, she said follow-up screening using the traditional and more accurate polymerase chain reaction nose and throat swabs would be necessary in some cases.

Mystery still surrounds how COVID-19 spread from a returned traveller found to be positive with the highly infectious Delta variant to families in West Melbourne, who had no contact with him.

Another puzzle perplexing health officials is how the more contagious Kappa variant transmitted from a Melbourne man who undertook quarantine in South Australia before returning home to Wollert in the city’s north and unwittingly seeding an outbreak that has been so far linked 73 infections.

Dr Kainer warned undetected chains of transmission of the virus in the community would flare up as movement increased.

“Testing is our eyes to see what is going on and it so important as we ease restrictions,” Dr Kainer said.

Sanjaya Senanayake, an infectious diseases specialist at the Australian National University, said until Victoria reached herd immunity through immunisation against COVID-19, it could not afford to let testing rates drop.

“Anything less 80 per cent coverage and we won’t necessarily have herd immunity,” he said.

Herd immunity occurs when a large enough proportion of the population is vaccinated against a disease, or has been infected with a disease and developed antibodies against it, preventing the virus from transmitting widely.

Professor Senanayake said he was not only concerned about the short-term ramifications of outbreaks of coronavirus, but the growing phenomenon of long COVID, a lasting disorder that arises following infection with COVID-19.

Surveys of thousands of people globally have revealed an extensive list of symptoms, such as fatigue, dry cough, shortness of breath, headaches and muscle aches. One study in the United States found 205 symptoms in a study of more than 3500 people.

“The burden of disease remains significant because the effects of this virus can linger for long time after infection,” he said.