A devastated wife has shared footage of her husband driving his motorbike at speeds of more than 260km/hr before a horrifying crash that has left him brain-damaged for life.

The video showed the rider rear-ending a stationary truck on a South Australian highway after seconds earlier clocking 267km/hr on his speedometer.

He could also be seen rapidly accelerating as he slalomed in and out of traffic.

The collision left him in a coma for two months and he now needs full-time care because of the impact the crash had on his ability to communicate.

His wife has made the heartbreaking decision to allow SA Police to share the vision publicly on Tuesday to highlight the dangers of driving at extreme speed.

‘His decision to ride at extreme speed did not just impact him. It impacted the lives of those strangers who kept him alive on the road and forever changed the lives of his family,’ the video’s caption reads.

‘Someone has to pick up the pieces.’

The release of the video is timed to coincide with new laws introduced in state parliament on Tuesday enforcing tougher penalties for speeding drivers. 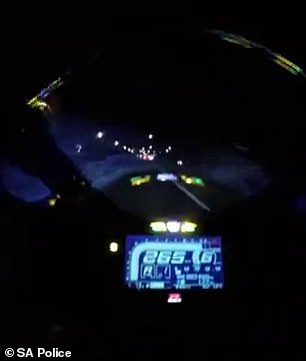 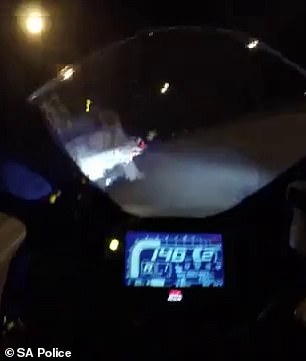 Seconds from disaster: A motorbike rider filmed himself driving at speeds of more than 260km/hr on his motorbike before a horrifying crash with a stationary truck

The laws will mean the maximum penalty for driving at extreme speed is increased to five years in prison.

Rule-breakers also face having their license disqualified for at least five years.