‘Violent insurrection, also known as doing a coup, is a classical system of installing a government’

A few weeks after the January 6 insurrection attempt staged at the US Capitol, Stanford Law student Nicholas Wallace mocked up a satirical flier aimed at the Federalist Society, an influential national organisation for conservative and libertarian lawyers.

The message mocked the group after some of its prominent members, including Republicans Senator Josh Hawley and Texas Attorney General Ken Paxton, backed efforts to overturn the election.

“Violent insurrection, also known as doing a coup, is a classical system of installing a government,” Wallace, 33, wrote in the flier, which claimed to be an invitation to hear Hawley and Paxton discuss the merits of a coup.

The January 6 riot at Capitol Hill has increased urgency to tackle the domestic terror threat in the US.Credit:Parler via ProPublica

“Although widely believed to conflict in every way with the rule of law, violent insurrection can be an effective approach to upholding the principle of limited government.”

Four months later, as Wallace prepared for graduation, final exams and bar prep, his joke had unexpected consequences: The university, he learned, was holding his diploma after the Stanford chapter of the Federalist Society filed a complaint.

Stanford said Wallace could not get his diploma at a June 12 graduation ceremony while the school investigated the claim that he had defamed Hawley, Paxton and the organization – a move that threatened his chance to take the bar exam this summer. 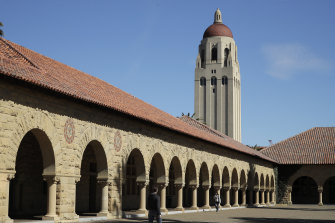 On Wednesday evening, though, the university reversed course after a firestorm of criticism following an article in the national current affairs publication Slate that detailed the case. The school confirmed that it has now resolved the complaint, and that Wallace will be allowed to graduate on time next week.

“My immediate reaction was relief that Stanford has come to its senses,” Shawn Musgrave, a classmate who helped Wallace navigate the university’s judicial process, said.

“But it doesn’t eliminate my disappointment that it took national pressure to get Stanford to do what it should have done at the beginning, which is to realise it could not take action in this case.”

Stanford’s investigation had triggered red flags among First Amendment advocates, who noted that the Supreme Court has held that satire of public figures qualifies as free speech.

“A reasonable person can’t read this email and think on the morning of Jan 6, Senator Hawley was actually in Northern California teaching students how to riot,” said Adam Steinbaugh, an attorney with the Foundation for Individual Rights in Education, which advocates for freedom of speech on campus. “That’s why it’s ironic. That’s why it’s satirical.”

Wallace, a third-year law student from Ann Arbor, Michigan, who is planning to take the bar exam this summer in his home state, dreamed up the satirical flier in the wake of the Capitol riot.

Following the events on January 6, the Federalist Society faced criticism after some members in Congress and state governments were accused of inciting or condoning the insurrection.

On January 25, Wallace, who declined to comment for this story, sent the flier using the similar format and tone of the Stanford Federalist Society’s emails, to a student-run email list that is often used as a forum for politics discussion. The flier, which was dated January 6, advertised an event called “The Originalist Case for Inciting Insurrection.”

“Senator Hawley will argue that the ends justify the means,” Wallace wrote. “Attorney General Paxton will explain that when the Supreme Court refuses to exercise its Article III authority to overturn the results of a free and fair election, calling on a violent mob to storm the Capitol represents an appropriate alternative remedy.”

The flier attracted mixed reactions among Stanford’s law students. Some found it amusing, while members of the Federalist Society protested, according to copies of the emails made public by FIRE.

The email soon went viral and was shared widely on Twitter and posted in a Facebook group dedicated to law school memes. USA Today caught wind of the post and published a fact check, confirming that the flier was indeed fake.

The outrage eventually simmered down and for months Wallace heard nothing about it. He was unaware, though, that a leader of Stanford’s Federalist Society chapter, who has not been publicly identified, filed a student conduct complaint to the university’s Office of Community Standards in March.

“Wallace defamed the student group, its officers, Senator Josh Hawley, and Texas Attorney General Ken Paxton,” the complaint said, adding that Wallace “deceived” people and that the reputations of members of the group “have been harmed.”

In May, the group put pressure on Stanford’s Office of Community Standards to pursue the charges, according to FIRE. On May 22, weeks before law school graduation, the university notified Wallace that the school was proceeding with the complaint and that his diploma would be put on hold.

The Stanford Federalist Society did not immediately respond to request for comment late on Wednesday.

Steinbaugh then took up the case, sending Stanford a letter expressing his organization’s concerns that the investigation violated Wallace’s free speech protections.

“If you’re running a student conduct office at a university like Stanford, you should know what protected speech looks like and you should already have made steps to make sure that won’t have a chilling effect,” Steinbaugh said.

Wallace said the school’s decision to open a probe tarnished his last weeks at Stanford.

“It has been a pretty awful way to close out my career at Stanford,” Wallace told Slate. “Instead of studying for finals, I’m trying to figure this out. I just sent an email to my family trying to reassure them that I haven’t blown it in my last few days at Stanford.”

“I hope to work with Stanford in the little time I have left to make sure that no other student is subjected to an abuse of process in this way again, and to develop better protections for students’ freedom of expression,” Wallace said in an email he shared with The Post.

He ended the email with one last quip: “PS this email not satire.”