Volodymyr Zelensky delivers historic address to the House of Commons

‘We will fight them in the sea, air, forests, fields and streets… we will not surrender’: President Zelensky echoes Churchill’s famous WWII speech in moving address to the Commons as he describes Ukraine’s resolve to defeat Putin’s troops

Ukrainian President Volodymyr Zelensky today channeled Winston Churchill as he delivered a historic address to the House of Commons.

Mr Zelensky was given a standing ovation by MPs both before and after his speech in which he compared Ukraine’s fight against Russia to Britain’s World War Two struggle against Nazi Germany.

Drawing on Churchill’s iconic rallying remarks, he said Ukrainians will fight against Moscow’s forces on land, sea and in the air.

Mr Zelensky said: ‘We will not give up and we will not lose. We will fight to the end, at sea, in the air, we will continue fighting for our land, whatever the cost.’

He said Ukraine is fighting a ‘war that we didn’t start and we didn’t want’ as he told MPs ‘we do not want to lose what we have, what is ours’.

Comparing Ukraine to the UK in World War Two, Mr Zelensky said Ukrainians are fighting to save their country ‘just the same way as you once didn’t want to lose your country when Nazis started to fight your country and you had to fight for Britain’.

He also said more than 50 children have now been killed in the invasion, telling the Commons: ‘These are the children that could have lived, but these people have taken them away from us.’

Boris Johnson responded to the address by telling MPs that ‘Britain and our allies are determined to press on with supplying our Ukrainian friends with the weapons they need to defend their homeland as they deserve’.

The Prime Minister said the UK will also ‘press on with tightening the economic vice around Vladimir Putin and we will stop importing Russian oil’.

He added: ‘We will employ every method that we can – diplomatic, humanitarian and economic – until Vladimir Putin has failed in this disastrous venture and Ukraine is free once more.’

The address by Mr Zelensky came as the UK Government faced mounting criticism over its visa scheme for Ukrainian refugees.

Ministers have been slammed by critics over the slow pace of processing applications amid wider calls for Britain to put in place a more generous scheme to help people fleeing the Russian invasion.

The Government is now scrambling to improve the situation, with Defence Secretary Ben Wallace having offered military support to the Home Office to help deal with the backlog of people trying to get into the UK.

Meanwhile, Foreign Secretary Liz Truss has announced a new visa processing centre is being set up in Lille in northern France following reports that refugees arriving in Calais were being told they must go to Paris or Brussels to apply.

Mr Johnson delivered an update on the Ukraine crisis to his Cabinet this morning. Downing Street said the PM told his senior ministers that the UK is continuing to supply ‘lethal defensive aid and equipment’ to bolster the Ukrainian forces’ ‘heroic’ resistance in the face of the Russian onslaught.

The premier said the UK would be ‘as generous as we could’ in its support for Ukrainian refugees.

Mr Johnson also hosted a meeting of the leaders of the Visegrad group of countries – the Czech Republic, Slovakia, Hungary and Poland – during which he labelled Vladimir Putin’s invasion a ‘catastrophic venture’. 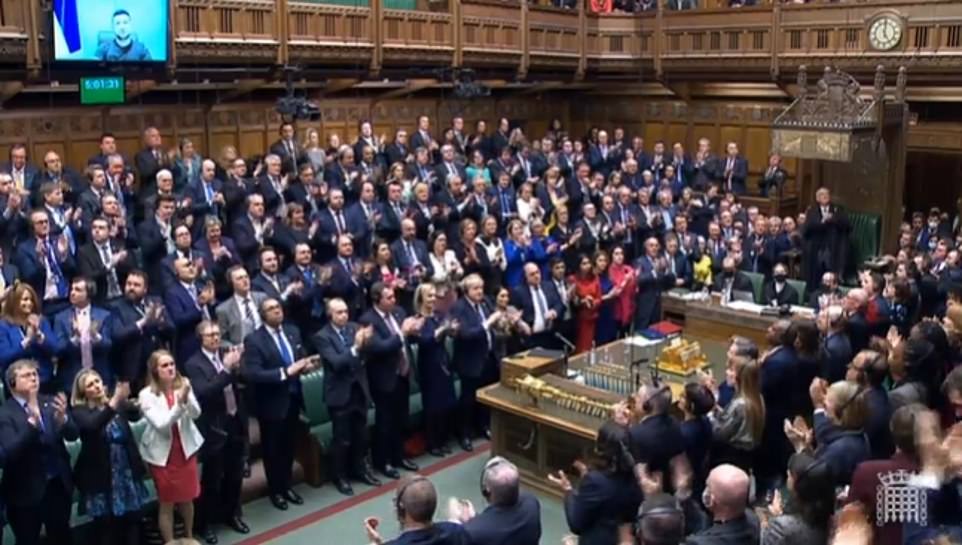 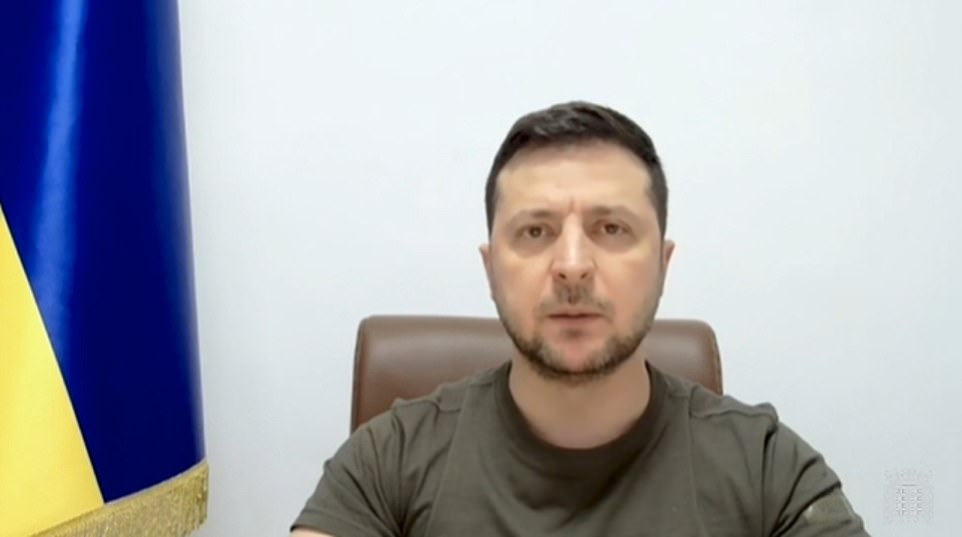 Ukrainian President Volodymyr Zelensky today channeled Winston Churchill as he delivered a historic address to the House of Commons. 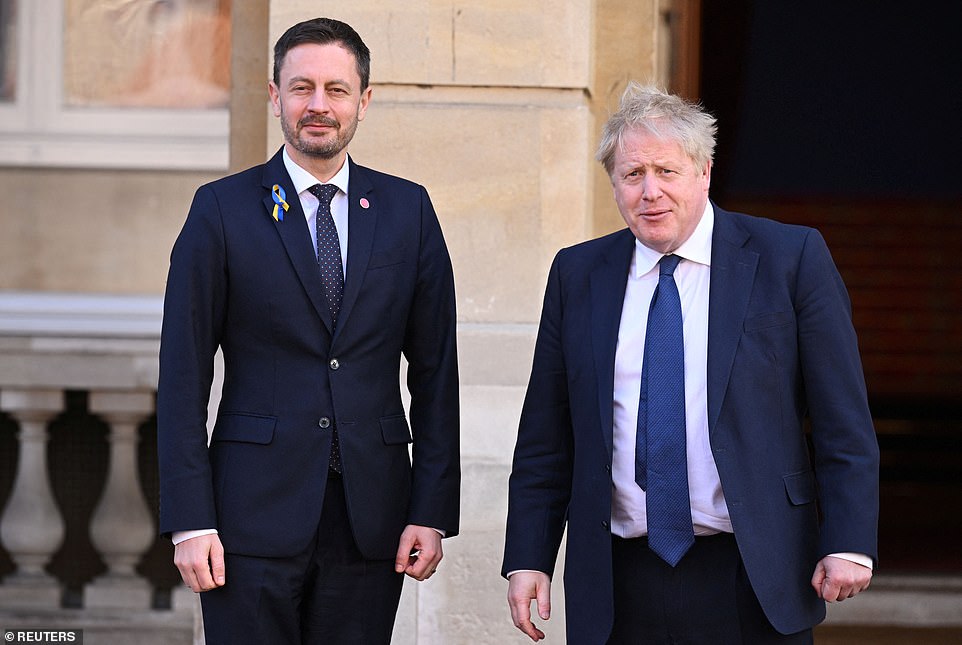 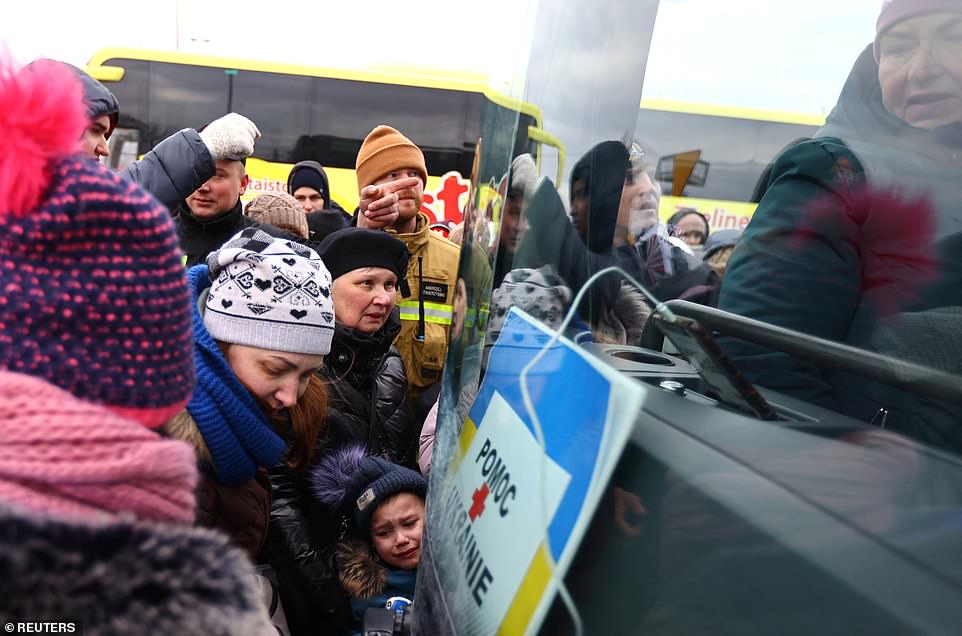 The UK Government is facing mounting criticism over its visa scheme for Ukrainian refugees. People are pictured today boarding a bus to Warsaw in Przemysl, Poland

The Home Office disclosed on Monday night that just 300 visas had been issued out of a total of 17,700 family scheme applications that have been started, 8,900 of which have been formally submitted.

In the Commons this afternoon, Home Office minister Kevin Foster said the figure for visas issued has since risen to more than 500, while the new processing centre at Lille is expected to be set up within the next 24 hours.

He told MPs officials are also looking at how transport can be provided between Calais and Lille, but the slow rate of progress continues to attract criticism from all sides.

Shadow home secretary Yvette Cooper said that, while other countries are supporting hundreds of thousands of people, 600 people seeking to reach the UK have been turned back at Calais.

‘Most want to stay close to home but some want to come here to join family or friends, and we should be helping them; instead most people are still being held up by our Home Office bureaucracy or being turned away,’ she said.

Senior Tory backbencher Sir Geoffrey Clifton-Brown, who secured an emergency Commons statement from Mr Foster on the subject, said that, while security checks are important, it should be possible to speed up the process.

‘We need efficiency but also humanity when processing applications of refugees from Ukraine, and we should warmly welcome those refugees to this country,’ he said.

Mr Foster said officials were having to deal with people presenting with false documents and ‘making claims that are not true’.

Conservative former immigration minister Caroline Nokes said there was still no sign of a promised humanitarian sponsorship visa route to operate alongside the family reunion route.

‘Snails also move at pace,’ she told Mr Foster. ‘When (he) says he is moving at pace it needs to be a great deal faster.’

Downing Street announced this afternoon that former government minister Richard Harrington has been appointed to a newly created role of Minister for Refugees.

Mr Harrington, who stood down as a Tory MP at the 2019 general election, will be made a life peer sitting in the House of Lords.

Earlier Mr Wallace acknowledged that the Government needed to move quicker and said he was offering Ministry of Defence (MoD) support to the Home Office to speed up the work.

‘We can do more, we will do more,’ he told BBC Breakfast.

‘It’s not the case that we are only allowing 300 people in; it is the case that the system has not been quick enough, which is what we’re going to address.’

Mr Wallace this morning again ruled out the UK enforcing a no-fly zone above Ukraine – a key request made by Mr Zelensky. 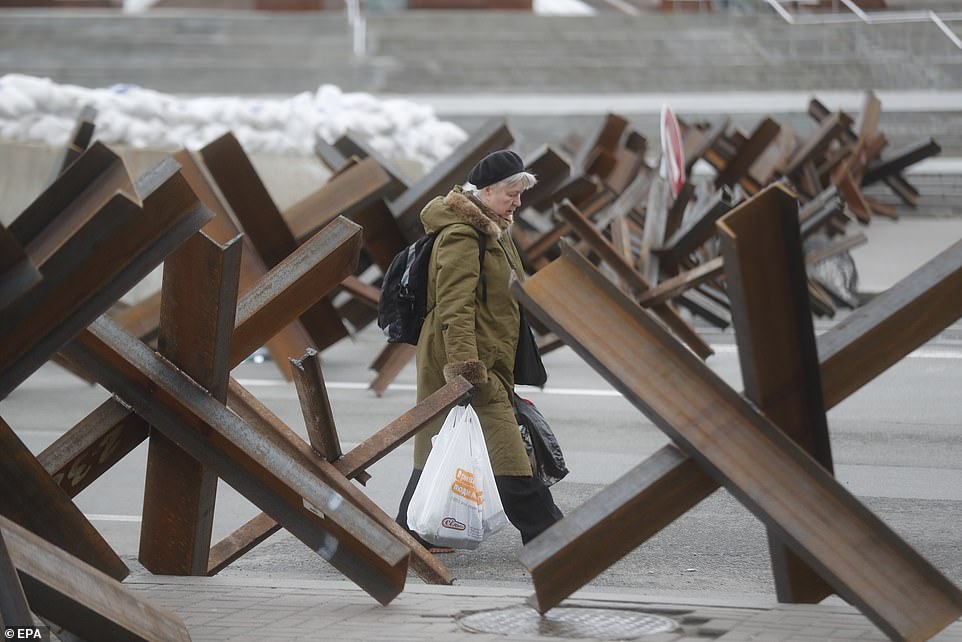 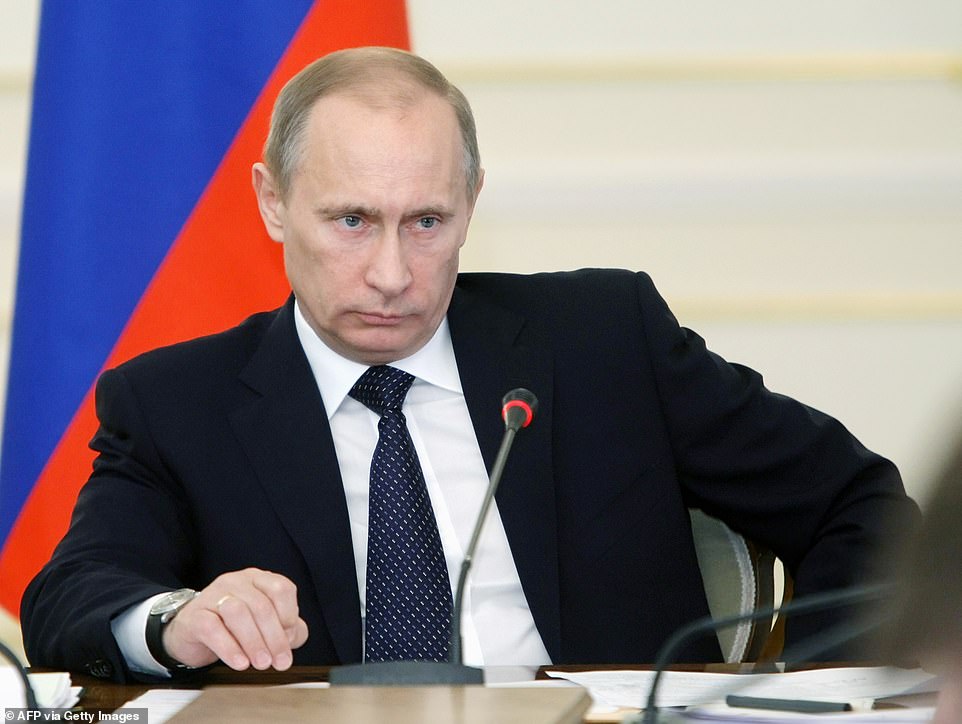 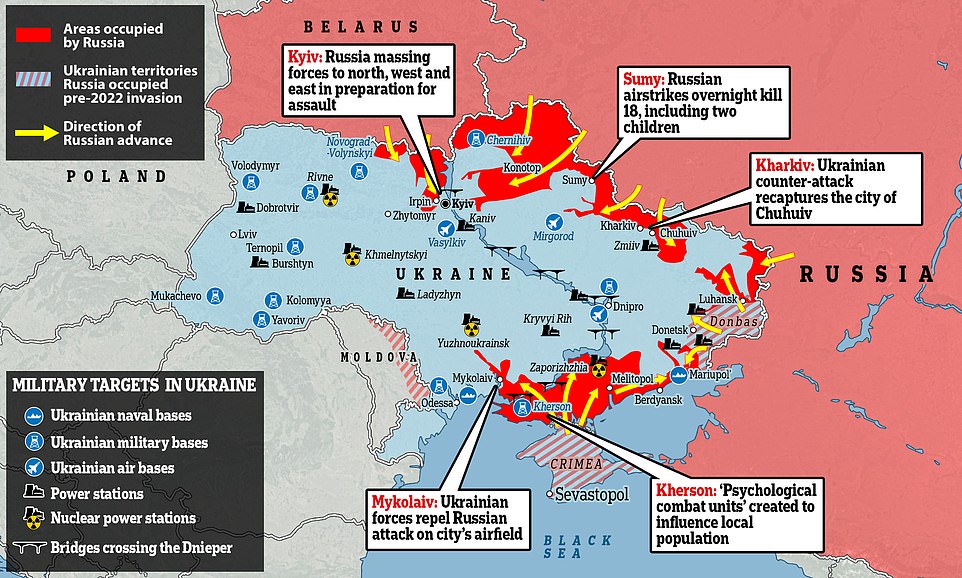 Russia has now committed all of the forces it massed on the Ukrainian border before the invasion, and has made only limited territorial gains – capturing just one major city, Kherson. Others, including Sumy and Kyiv, are slowly being surrounded but in some places the Ukrainians have managed to thwart Russian attacks or successfully counter-attack

The Defence Secretary said the UK must be ‘realistic’ about how it can help Ukraine, with ministers having to strike a ‘difficult balance’ of offering support without triggering a wider NATO conflict with Russia.

The UK has repeatedly rejected calls for a no-fly zone because it would pit NATO fighter jets against Russian fighter jets – a situation which could easily spiral into all-out war.

Mr Wallace questioned how effective a no-fly zone would be in helping Ukraine because while no country would be able to fly in the area, forces like Russia ‘with overwhelming artillery and missile batteries will be able to continue’.

The Cabinet minister also declared he believes Mr Putin is a ‘spent force in the world’ and the invasion of Ukraine will be the Russian President’s ‘end’.

He said Mr Putin’s attack is ultimately doomed to fail because of the fighting spirit of the Ukrainian people and occupying such a large country against its will is an ‘impossible task’.

Mr Wallace said Mr Putin’s actions mean ‘he is done’ and ‘no one will be taking his phone calls in the long term’.