THE grief of losing a beloved pet can be too much to bear for some people.

But thanks to today’s pet cloning industry, you can now be reunited with your cuddly companion in a matter of months after their death – if you can afford it. 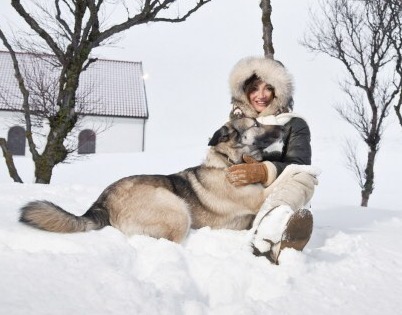 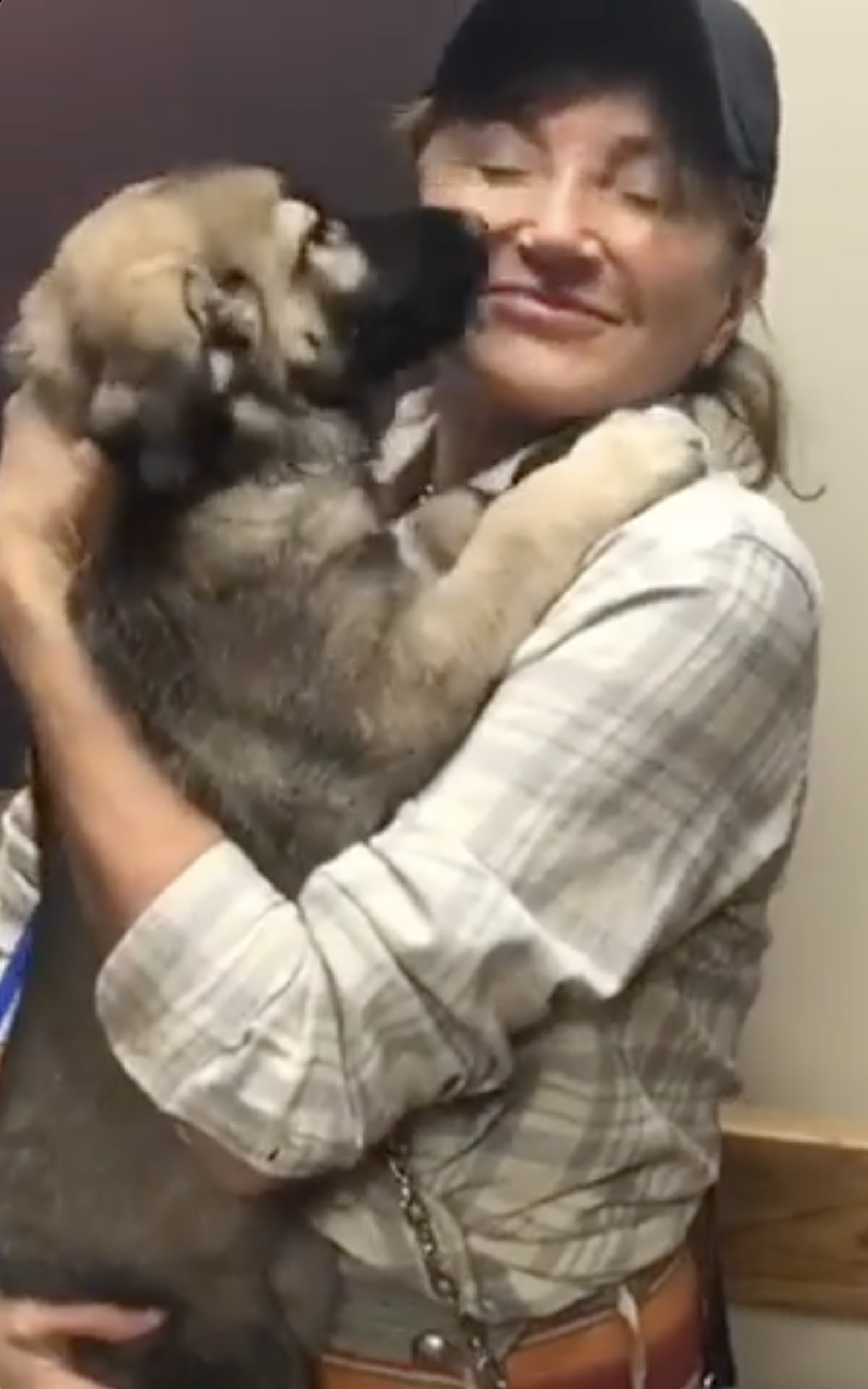 It's been 25 years since the birth of Dolly the sheep, the first clone of an adult mammal in history.

Now cloning is an everyday reality for wealthy pet owners around the world who splurge tens of thousands to get an identical copy of their treasured animals.

And as the pandemic brought millions of us closer to our pets than ever before, business is booming for cloning companies.

There are several international labs offering the sci-fi service to well-heeled clients, including ViaGen Pets in Texas.

The firm will make a genetically identical copy of your dog for $50,000 (£36,000) – a service used by the likes of Barbra Streisand to get over the grief of their lost loved ones.

Most of their clients are based in the US, but growing numbers of pet owners in the UK have also sought out their services.

“As with other segments of the pet industry, we’ve seen an increase in demand during the pandemic,” says Melain Rodriguez, a Client Service Manager at ViaGen.

“With more families being home with their pets, more are realising their pets are family members, providing the comfort needed during uncertain times.” 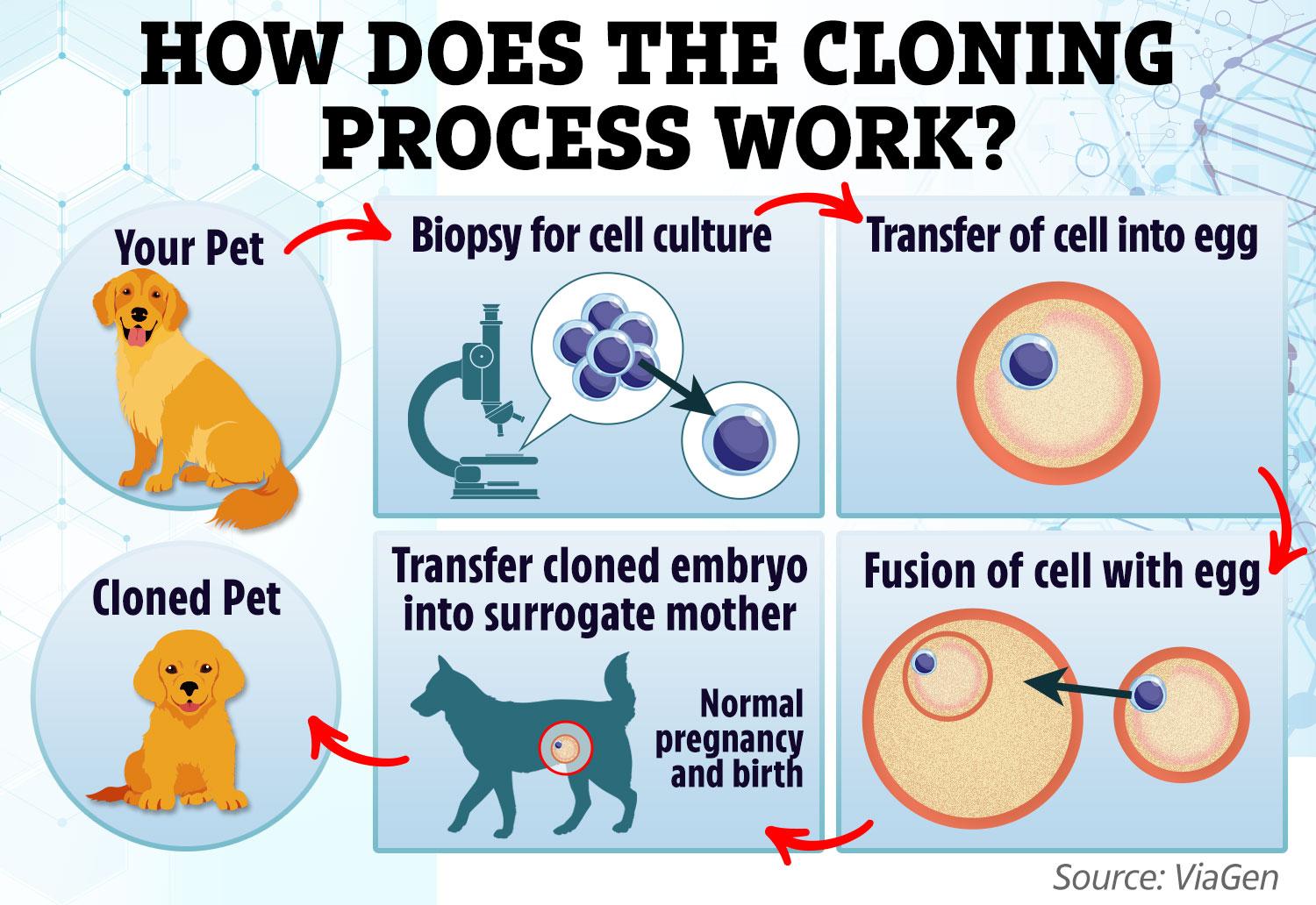 The way cloning works is through a process called “somatic cell nuclear transfer”.

Scientists take an egg from, say, a donor dog and remove the egg’s nucleus – the part which contains DNA.

They then insert a cell from the dog that’s being cloned, typically taken from its skin, before using an electric blast to fuse the cells together.

Once cell division begins, the embryo is implanted into a surrogate dog’s womb and, if the pregnancy is successful, a clone is born around two months later.

The cloned puppies then spend the first months of their lives with their surrogate mother before being brought home by their new owners.

Melain likens the process to “identical twins born at a later date”.

One ViaGen client who’s been grateful for her cloned dog is Dorrit Moussaieff.

The former First Lady of Iceland, who was born in Israel but spent her teen years in London, decided to clone her dog, Samur, before he died in 2019.

Dorrit, 71, says the German Shepherd and Icelandic Sheepdog cross was “the love of her life”, and she didn’t hesitate to clone him.

“I loved this animal so much that it made no sense not doing it,” Dorrit tells The Sun.

“Imagine if you had a child and your child had sadly had an accident or passed away.

“That dog gave me more pleasure and more comfort in my life than anything else put together.”

Before Samur died, a vet collected his blood and skin cells which were couriered to ViaGen in the States for cloning.

Dorrit’s family business, Moussaieff Jewellers, is one of the world’s most exclusive gem traders – her ancestors were once crown jewellers to Genghis Khan, and her grandfather supplied stones to Carl Faberge.

So it’s not surprising that she wasn’t worried about the cost of cloning.

“I have no kids’ courses to pay, no kids’ holidays to pay,” Dorrit says.

“It’s much less expensive than having children.”

ViaGen says some of its clients are nowhere near as wealthy as the likes of Dorrit and Barbra Striesand.

“We have clients who may have saved money over the years specifically for this or those that may not have children so instead of paying for college or a wedding, they clone their pet instead,” Melain says.

While being genetically identical to Samur, there’s no guarantee that the dog’s personality will be the same – but Dorrit insists Samson is “absolutely identical” to the original.

She says: “It’s quite frightening. Samur barked every time there was clapping, and now it looks like Samson is doing exactly the same thing.”

Samson is now living with Dorrit in Knightsbridge, central London – but he’s not the only clone living in the UK.

'We put the dog in the freezer'

The dad-of-two, 48, wanted to ease Laura’s suffering when her Boxer, Dylan, passed away.

“Dylan had been through all sorts of emotional things with Laura through her life and she had such a connection with him,” Richard tells The Sun.

“She was just heartbroken. So we decided to put the dog in a freezer.”

Richard and Laura wanted to preserve Dylan’s remains so they could bury him at a new house they were moving into together.

But weeks after his death, Laura was still “absolutely distraught”.

“She’d talked to me about maybe stuffing him,” Richard says.

“So I set out find someone to get him stuffed – when I came across somebody in Korea who clones dogs.”

That man was Hwang Woo-suk, a pioneering South Korean veterinarian researcher who successfully cloned the first dog, Snuppy, in 2005.

Dr Hwang made the sensational claim a year earlier that he and his team had successfully cloned a human embryo, but in 2006 the breakthrough was revealed to be bogus.

He was acquitted of fraud, but he was convicted of breaking bioethics law – he’s no longer allowed to attempt to clone a human embryo, but he is still allowed to clone pets.

Every time she looks at them, it’s like two of Dylan

But the lab told him it couldn’t be done – Dylan had been dead for two weeks at the point at which Richard got in touch.

Undeterred, Richard eventually got them to agree to attempt the cloning for “research” purposes.

Richard says: “They wanted $10,000, so I got them $10,000 and I then had the problem of getting the cells from the dog because the dog was frozen – and it’s the last thing you want to do if you want to clone them.”

After paying off a retired vet to collect the samples from Dylan, Richard flew to South Korea to hand them over.

But upon returning to the UK, he was told the cells weren’t suitable and he’d have to do it all over again.

To the astonishment of Richard – and the scientific community – the lab was able to use the cells from the second sample to successfully create not one, but two clones: Shadow and Chance.

“Laura’s got over Dylan and she’s got two mini Dylans,” Richard says.

“It was the perfect thing for her. She loves these dogs to bits – every time she looks at them, it’s like two of Dylan.”

After his positive personal experience, Richard decided to become an agent for the lab, travelling the world to guide English-speaking clients through the cloning process for a commission.

He’s only stopped for the moment because of travel restrictions related to the pandemic.

“Before lockdown, I had a suitcase packed all the time and I was coming and going like a bloody yo-yo,” he says.

Despite running a masonry company, Richard would travel anywhere in the world within 12 hours to collect cells from pets people want to clone.

Urgency is required because cells need to be collected before or shortly after the dog’s death if there’s any chance of the samples being viable.

Once preserved in a “cell bank”, owners can then pay to keep their dog’s DNA stored in perpetuity, or they can go ahead with a cloning attempt right away.

“I always tell people to chill out,” Richard says.

“You need to be 100 per cent sure. They ring up and they’re upset, and they just want to do it because they’re upset.”

Once the samples are frozen, owners can then take as much time as they like to grieve before making the momentous decision of whether or not to go through with cloning.

“A lady came back to me a year after having the cells frozen to clone her dog, so you don’t know what’s going on in people’s minds,” Richard says.

Richard himself needed a long time to decide that he is now definitely ready to clone another of his own dogs, Max, who died in 2019.

“I couldn’t look at pictures of him or anything like that for a year, you see,” he says.

“Now I’ve gotten over him a bit, I can’t wait to clone him.”

Richard ultimately wants to use his involvement with commercial cloning in helping to protect endangered species, as well as creating service dogs.

In South Korea, clones have been used as sniffer dogs at airports for years.

The idea is that it saves time and money to recreate successful service dogs instead of tolerating a high failure rate in training naturally born puppies.

Cloning 'not the answer'

But despite the potential upsides, rights groups remain critical of pet cloning.

An RSPCA spokesperson said: "Losing a much-loved pet is very distressing, and we understand that people can find it hard to let go of an animal who meant so much to them, but cloning is not the answer.

“There are serious ethical and welfare concerns around the application of cloning technology to animals.

“Cloning animals requires procedures that cause pain and distress, with high failure and mortality rates.”

The spokesperson also pointed out that no clone will ever be an “exact copy” of the original pet anyway, adding: “We would recommend anyone looking for a new pet to become part of their family to adopt one of the thousands of animals in rescue centres looking for their forever home.”

Despite objections, demand for cloned pets continues to soar.

Melain from ViaGen says: “We included pet cloning as part of our cloning services in 2015 and demand has increased each year and we expect the demand to increase as more and more pet parents become aware of our services.”

She added that cloning has become much more efficient over the last 25 years and criticisms may be based on “antiquated sources” of information.

“ViaGen Pets is committed to the health and well-being of each and every dog and cat with whom we work,” Melain says.

With the clients able to store their pet’s cells for decades, they can keep cloning them again and again.

So when Samson dies, will Dorrit welcome another dog identical to Samur into her life for a second time?

She says: “I very much hope I will, yes. 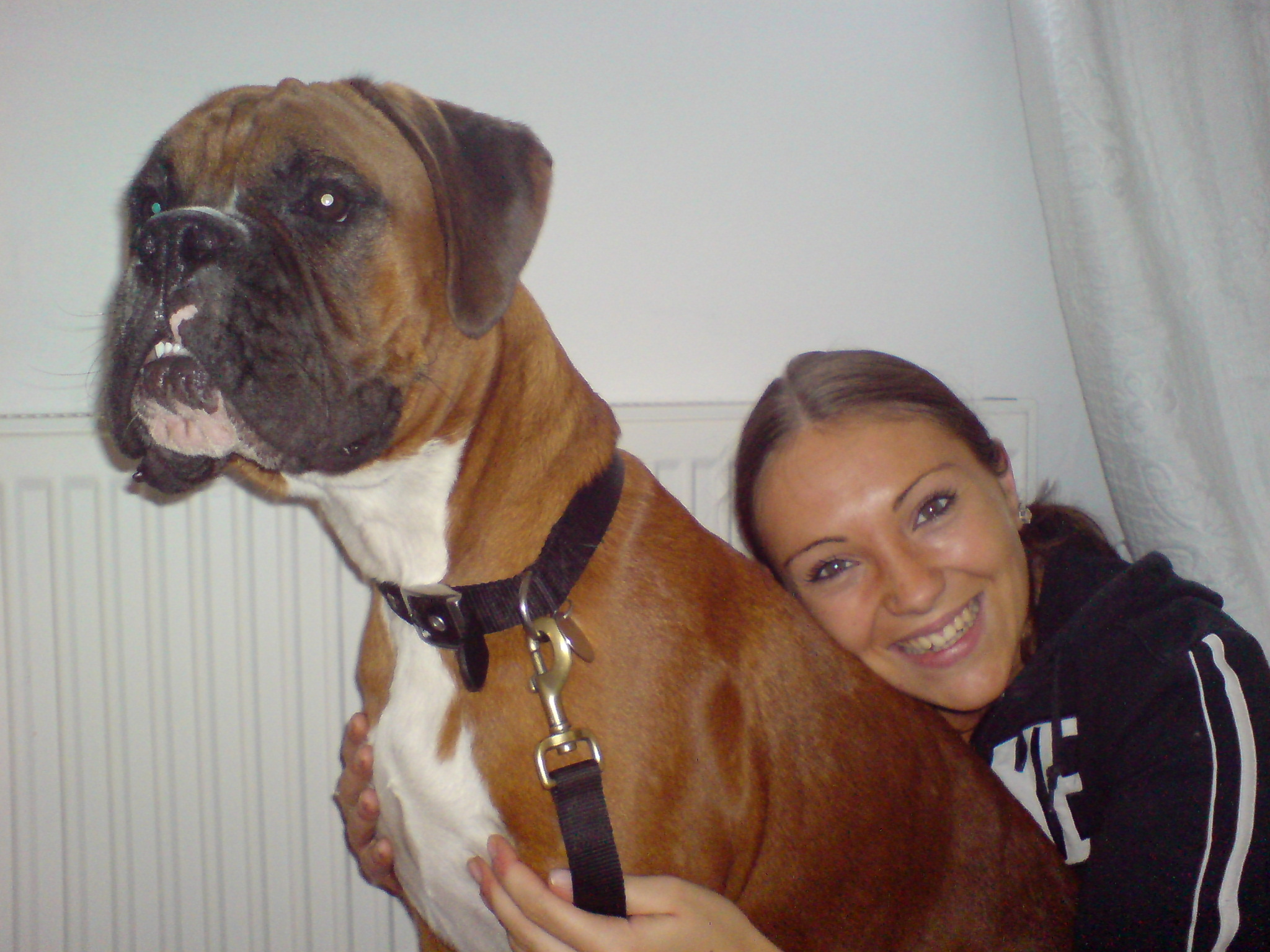 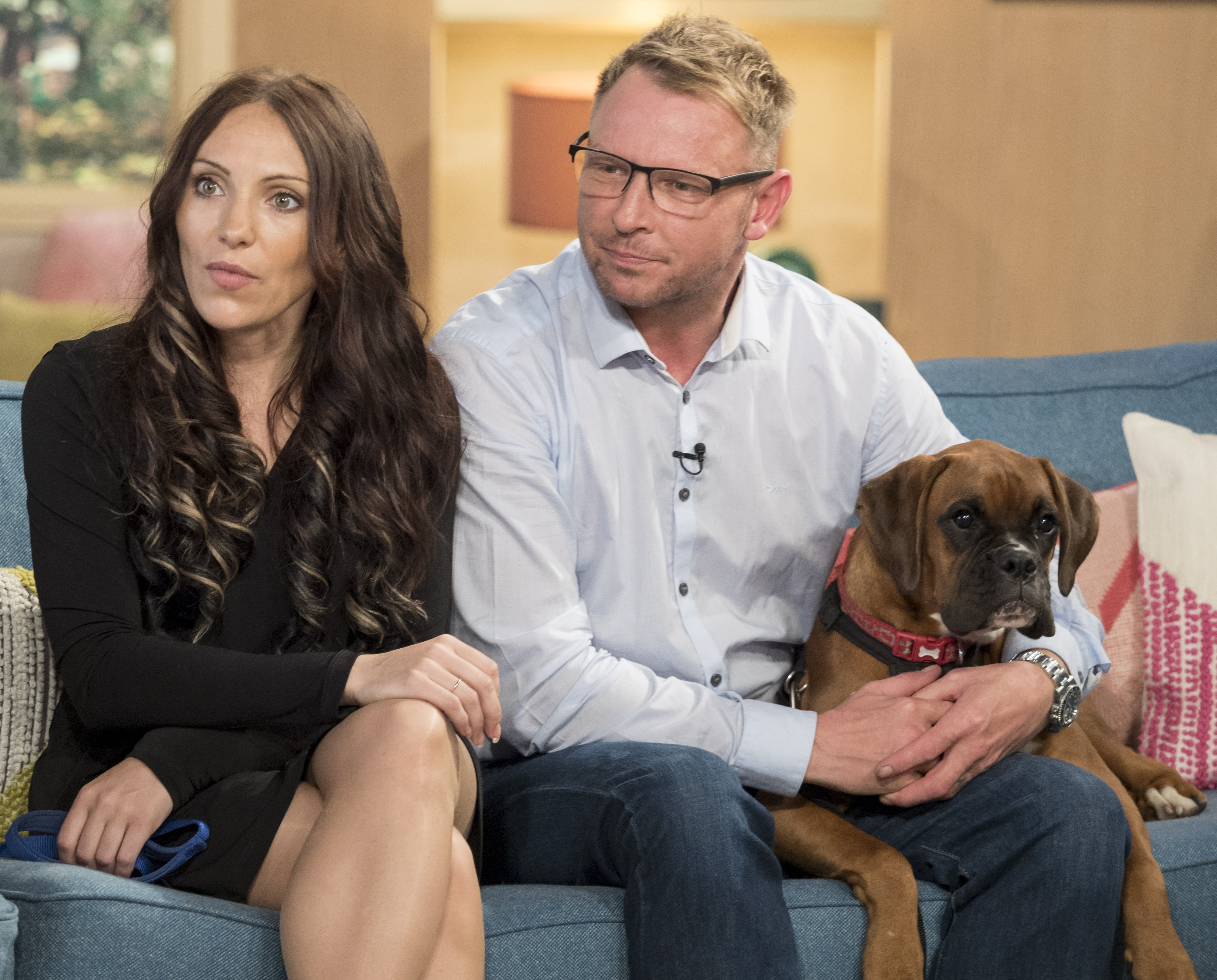