Washington: Thanksgiving is a seriously big deal for Emily Smith. The 37-year old usually starts planning her menu a month in advance and begins cooking a week before the big day. As well as the obligatory turkey, she likes to experiment with less traditional dishes such as harissa sweet potatoes, shiitake gravy and "crack pie" – the indulgent oatmeal and brown sugar dessert invented by celebrity chef Christina Tosi.

Smith and her husband are usually joined at their home in Washington D.C by around eight family members who fly in from Illinois and Michigan and stay for up to a week.

As well as a passionate home cook, Smith is an epidemiologist at George Washington University. Since March she has managed COVID101, a website where health experts answer people’s questions about the virus such as "When should you wear gloves?", "Can I go trick-or-treating?" and "Should I change my Thanksgiving plans?" 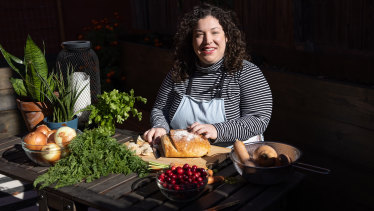 Epidemiologist and culinary enthusiast Emily Smith has scaled back her Thanksgiving plans because of the coronavirus pandemic. Credit:Evelyn Hockstein

Her answer to the final question is clear: people should limit their Thanksgiving guest list to people they live with. The Centres for Disease Control and Prevention, one of the nation's top public health bodies, last week released the same official advice.

Usually a period of gratitude and celebration, this year's Thanksgiving is a time of high anxiety. Coronavirus infections are surging across the US: the country is recording an average 170,000 new cases a day as well as 1500 daily deaths. Thanksgiving, which is celebrated on Friday (AEDT), will almost certainly push those numbers even higher, a prospect that is alarming public health experts.

"It’s a time when we get together with many people, including people that aren’t part of our regular households," Smith says.

"You have 10 people crammed into the kitchen, people sitting side-by-side at the dinner table for hours. All these things come together to create a perfect storm where it’s very high-risk to go ahead with a normal Thanksgiving."

Reflecting on the likely spike of post-holiday infections, Smith says: "I’m really worried and my colleagues are too. We’ve felt sick about it for weeks."

Smith says she's concerned people are putting too much faith in getting a negative COVID test before visiting their family – an approach that has been nicknamed "test before turkey". Testing only goes so far, given people could pick up the virus during their travels or if they contracted it too recently to record a positive test.

Instead of cooking for 10 people as she normally would, this year Smith is preparing a meal for two: just herself and her husband. With COVID cases especially high in the Midwest, where her relatives live, her family decided it was simply too risky to gather together this year. 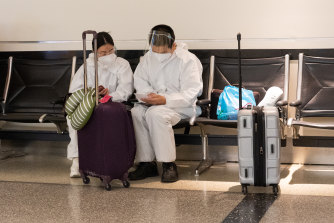 More than 1 million passengers flew through US airports last Friday, as families reunite for Thanksgiving despite the virus risks. Credit:Bloomberg

But many Americans aren't being so cautious. More than 3 million passengers have boarded flights in the past three days; US airports recorded their busiest day since the pandemic began on Monday (AEDT).

Despite the rising COVID-19 numbers, there's a pervasive sense of coronavirus fatigue across the country. Many Americans are desperate to maintain a sense of normality and reconnect with family members they haven't seen for months. This has caused tension in families where some members want to prioritise slowing the spread of the virus while others want to keep their usual traditions alive.

When The Sacramento Bee, a newspaper in California, asked its readers how they were celebrating this year, many responded that they were scaling back or cancelling their Thanksgiving plans. But others said they were pressing ahead as normal.

"Going to Idaho for a big family get-together! Woo-hoo!" said one reader. "We are celebrating like we always have," said another.

Several readers noted that California Governor Gavin Newsom had recently attended a dinner with around a dozen people at a ritzy Napa Valley restaurant. "I’m gonna do what our governor does … continue on with my life and go to dinner with friends and family," one reader said. 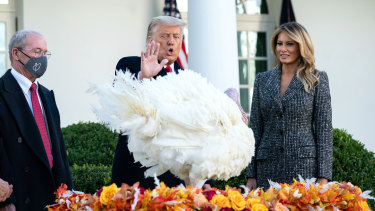 US President Donald Trump at the annual turkey-pardoning ceremony at the White House. Credit:UPI

Meanwhile Jared Polis, the Democratic Governor of Colorado, said holding large gatherings with people who had not self-quarantined was like "bringing a pistol to grandma's head".

Smith says she understands how difficult the decision has been for many people. "I've spent the last 10 months tracking the pandemic and it still makes me sad not to have a normal Thanksgiving," she says. "We’re craving comfort."

In order to maintain a sense of connection, she and her husband will speak to their family members on Zoom and play online games together on Thanksgiving.

With her guest list reduced to two, Smith had hoped to secure a smaller-than-usual turkey. But many people had the same idea: there has been an unprecedented boom in demand for small turkeys this year. So Smith is preparing a 5.5 kilogram turkey that feeds 12 people, the smallest she could find in her area.

"I see a lot of turkey tacos and turkey risotto in our future," she says.