Wimbledon fans are left 'absolutely gutted' as tickets are cancelled

Wimbledon fans have been left feeling ‘absolutely gutted’ after Ticketmaster cancelled their tickets because they breached a strict limit on credit card use.

Lucy Rayner thought she and her family had secured a pair of tickets for number one court on July 8, then a pair for ladies’ finals day, and finally a pair for men’s finals day.

But five days later Ticketmaster sent an email cancelling her purchase. ‘It was gutting,’ she told BBC News.

Her family has accidentally breached a strict rule against buying more than two tickets using the same credit card.

They said the rules were not made clear enough, while others complained it wasn’t mentioned in the 9,000-word long Terms and Conditions page. 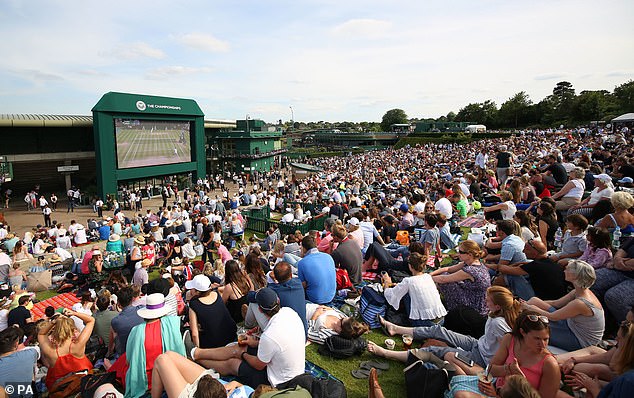 Lucy Rayner thought she and her family had secured a pair of tickets for number one court on July 8, then a pair for ladies’ finals day, and finally a pair for men’s finals day (file image)

But Ticketmaster claim a clear notice was printed in ‘multiple locations’.

What are the rules around buying tickets for Wimbledon?

Tennis fans hoping to secure tickets to Wimbledon will be left sour faced if they don’t understand the limits to tickets per household.

A notice under the ‘purchasing tickets’ section of the Wimbledon website is highlighted in bold and reads: ‘Important: If you exceed the purchase limit of two tickets for The Championships, your additional bookings will be cancelled, and your card will be refunded.’

It also warns fans they can only buy tickets for ‘one day of The Championships’.

It added: ‘As with our ballot, we strive to keep accessibility of tickets fair.’

Even if fans use separate accounts to buy tickets, Wimbledon will cancel any purchases above the limit of two tickets where only one credit card is used.

So if a family use one credit card to buy six tickets, four of those will be cancelled automatically and without notice.

Lucy and her family waited in three separate virtual queues on Thursday, using their own MyWimbledon accounts. When three codes were released on their individual emails they thought nothing of using the same credit card for convenience.

‘It was handy and we already had it out and because of the time pressure to secure the tickets,’ she added.

Lucy’s mother Marion said they were asked to re-read the ticket information to make sure it was all correct. She added: ‘There was nothing as far as we were aware saying you had to use different credit cards.’

The pressure to buy the limited number of tickets was on this year, after last year’s event was cancelled because of coronavirus. With social distancing rules limiting numbers this year, it was incredibly difficult to secure tickets.

And many fans now feel like they have been cheated, with their cancellations only coming through when ticket sales had ended.

Several tweeted they had made an initial ticket purchase, but managed to get better tickets after waiting in another virtual queue. They cancelled their first purchase, but then found themselves with no tickets at all after the better seats were also revoked.

Others said they wanted to help relatives navigate the system, or buy tickets as a gift for others, and later found the transactions had been cancelled.

Gail Emmerson wrote: ‘Absolutely gutted that @TicketmasterUK have cancelled our @Wimbledon tickets without contacting us first and when they finally decided to tell us, 3 days after purchase, it was when @the_LTA sales had finished! It was a 40th birthday present too.’

Kerry Leigh Kavannah added: ‘Rules say per person not per household! Shld be able to go to Wimbledon with a friend as shld my husband! Penalized for sharing a credit card. Up for stopping touts – I love Wimbledon and think REAL tennis fans shld go – but @TicketmasterUK system is rubbish &this is upsetting.’ 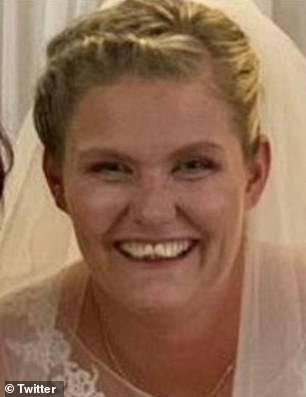 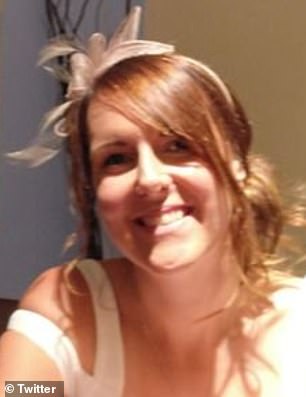 Several tweeted they had made an initial ticket purchase, but managed to get better tickets after waiting in another virtual queue. Pictured, Kerry Leigh Kavannah (left) and Gail Emmerson (right) both lost out 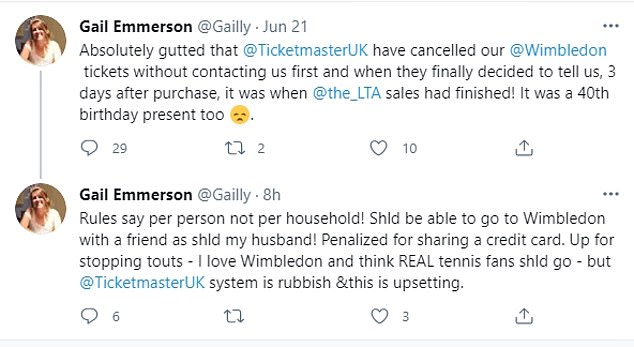 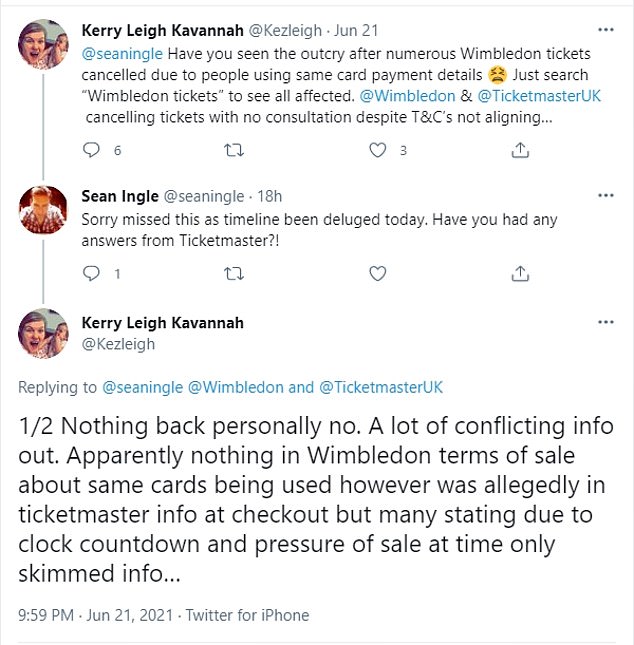 Many fans now feel like they have been cheated, with their cancellations only coming through when ticket sales had ended

The AELTC said: ‘Under the AELTC’s Conditions of Sale, the purchase of more than two tickets by any one credit card is strictly prohibited.

‘Regrettably, people who purchased more than two tickets using one credit card were contacted by Ticketmaster to advise that any transactions beyond the purchase limit would be cancelled.

‘We appreciate the disappointment this will have caused to those affected, but these conditions were clearly stated in multiple locations on the website, and at the ‘accept and continue’ stage of the ticket purchase.’

A screenshot from a Ticketmaster site showed the notice provided during the purchase process. It read: ‘Please note: There is a ticket limit of two tickets per person and per credit card on this event.’

The policy has been a long-standing ploy to ensure an even distribution of ticket sales, a spokesman said.