‘World is laughing at us’: Trump woos Hispanics voters in Florida as Biden, DeSantis unite over Ian

Donald Trump has sought to woo one of America’s fastest-growing voting blocs as he lays the groundwork for a potential presidential run, urging the Hispanic community to get behind him to stop the US becoming a country of “recession, depression and fear”.

As Joe Biden toured hurricane-ravaged Fort Myers with Florida’s Republican Governor Ron DeSantis – a Trump-ally who has spent years taking potshots at Democrats – Trump was on the other side of the state, taking aim at the FBI raid on his Mar-a-Lago home, lamenting the influx of illegal immigrants at the Mexico border, and warning that the nation was in decline. 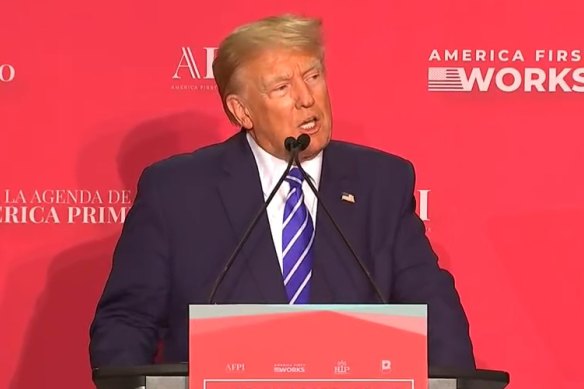 In a 40-minute speech to the National Hispanic Leadership Conference in Miami, Trump also praised Chinese President Xi Jinping as “a very powerful man” and “very smart” as he called for the US to impose the death penalty on convicted drug dealers.

“I got to be very friendly with President Xi,” Trump told the enthusiastic audience of Latino leaders and community members. “(He’s a) very strong person, very smart… If someone is caught in China selling drugs, they’re given a trial quickly, and if guilty, they are executed.

“So I’m calling for the death penalty for drug dealers and human traffickers – and if you do that, you’re going to stop crime in this country at a level that nobody will believe.”

Trump’s comments come amid figures showing US authorities have made more than two million immigration arrests along the southern border during the past 11 months, in a crisis fuelled by soaring numbers of people illegally crossing from countries such as Venezuela, Nicaragua and Cuba.

With five weeks until the midterm elections – and with polls suggesting Hispanic voters want the immigration system fixed just as much as non-Hispanic voters – Republicans are focusing heavily on the issue as they campaign to regain control of Congress at the November 8 poll.

The border crisis was also one of the many issues that Biden and DeSantis traded blows over until Hurricane Ian hit Florida as a Category 4 storm last week, wreaking destruction in much of the state.

In one of DeSantis’ most recent stunts, the brash Republican – who, along with Trump, is often touted as a contender for the 2024 presidential nomination – sent a group of chartered planes filled with migrants to Martha’s Vineyard, an affluent island in the Democrat-stronghold state of Massachusetts.

But on Wednesday (US time), both men buried the hatchet – at least for now – as they promised to work together to help Floridians whose homes were washed away or severely damaged. The death toll has now risen to 103, but this is expected to increase significantly as search and rescue operations continue.

“Today we have one job and only one job, and that’s to make sure the people of Florida get everything they need,” said Biden standing alongside DeSantis after surveilling the destruction with First Lady, Jill Biden. “We’re in this together.”

Meanwhile, back in Miami, Trump began his speech by praising the Hispanic community, many of whom voted for the former president in record numbers in 2020, drawn largely by his “America first” agenda, his small business policies, his “anti-socialist” messaging and his social conservatism on issues such as abortion. 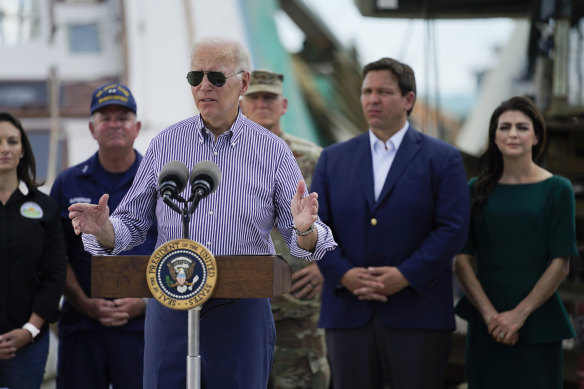 Getting along famously: US President Joe Biden speaks after touring an area impacted by Hurricane Ian in Fort Myers Beach.Credit:AP

For years, Hispanics have predominantly leaned to the Democrats, but the preferences of this diverse group, which constitute about 32 million registered voters, are now shifting, making them a key bloc at next month’s midterms.

Trump also expressed his “boundless sympathy and love” for everyone affected by Hurricane Ian, while praising the US coast guard, the national guard, and Florida’s Governor and mayors – but made no mention of the Biden administration’s joint efforts.

The rest of his keynote address was largely spent taking aim at what he described as the “documents hoax” (a reference to the Justice Department’s ongoing investigation into the classified material seized at Mar-a-Lago) and the “weaponisation” of law enforcement agencies.

Insisting he was the victim of multiple witch-hunts, he urged the Hispanic community to get behind him to help him reverse what he said was a “nation in decline”.

“Under the Biden administration we have become a land of recession, probably depression, and when you think of it, repression, misery and fear,” he said. 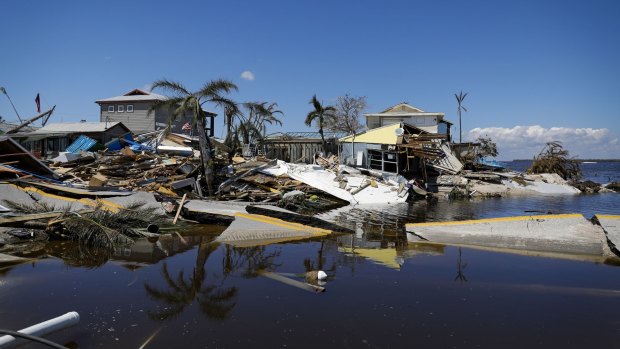 “We have to save the American dream because the world is laughing at us and they’re looking at us with ridicule.”