‘De-facto, we have already proven our compatibility with Alliance standards… Today, Ukraine is applying to make it de jure,’ the Ukrainian president said in a video address posted on social media.

‘We are taking a decisive step by signing Ukraine’s application for accelerated accession to NATO… in an expedited manner.’

At a grand ceremony in the Kremlin, the Russian president delivered a defiant speech in front of Moscow’s most senior political elite, telling the West the land grab was irreversible and calling on Ukraine’s emboldened army to give up and negotiate a surrender.

‘I want to say this to the Kyiv regime and its masters in the West: People living in Luhansk, Donetsk, Kherson and Zaporizhzhia are becoming our citizens forever,’ Putin said.

‘We call on the Kyiv regime to immediately stop fighting and stop all hostilities… and return to the negotiating table,’ the Russian leader added.

The packed hall erupted to chants of ‘Russia! Russia’ after the four leaders inked the deal, and Putin – rarely seen making physical contact since the pandemic – joined hands with his proxy leaders and was shown shouting along in unison on state TV. 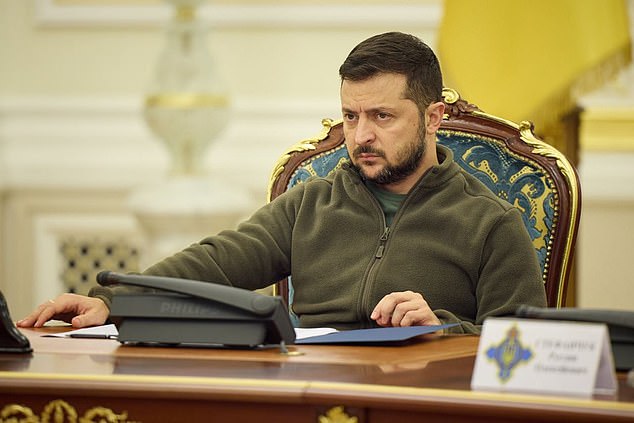 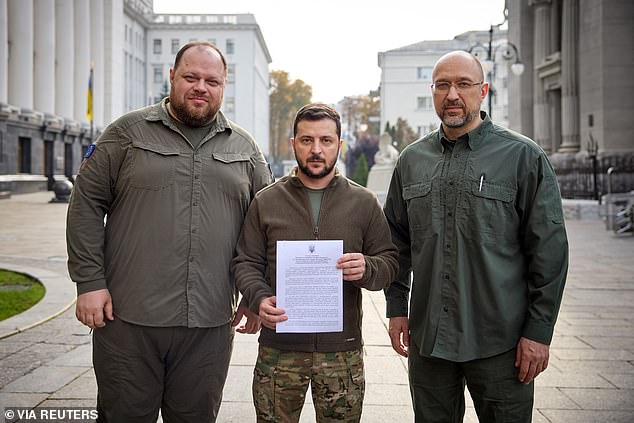 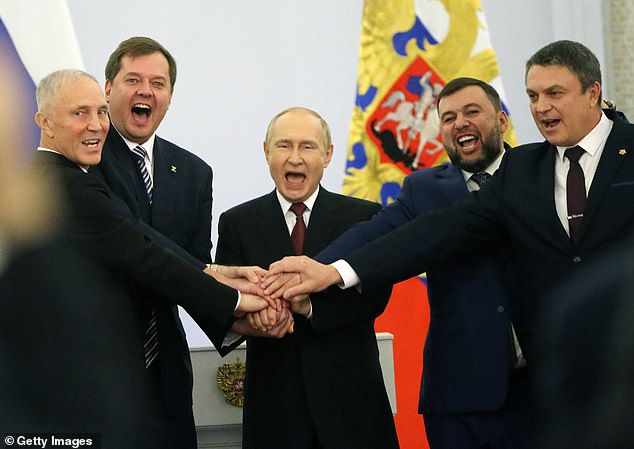 Russian President Vladimir Putin meets with Moscow-appointed heads of four Ukrainian regions, partially occupied by Russia, at the Grand Kremlin Palace on September 30, 2022 to commemorate their annexation of the territories 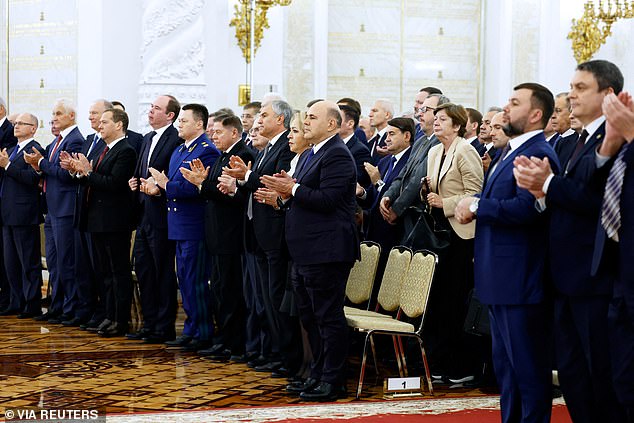 Russia’s Prime Minister Mikhail Mishustin and other participants attend a ceremony at the Kremlin to declare the annexation of the Russian-controlled territories of Donetsk, Luhansk, Kherson and Zaporizhzhia regions in Ukraine

Zelensky was clear in his message today, announcing intentions to repel Russian troops and retake all occupied regions while remaining open to negotiations with Moscow, provided Putin is deposed.

‘Firstly, strengthening Ukraine and expelling the occupiers from our entire territory is the only path to restoring peace. We will go this way,’ the president said on his official Telegram channel.

‘Secondly, Ukraine was and remains a leader in negotiation efforts. It was our state that always offered Russia to agree to a coexistence on equal, honest, dignified and fair terms.

‘It is obvious that this is impossible with this Russian President. He does not know what dignity and honesty are. Therefore, we are ready for a dialogue with Russia, but with another President of Russia.

‘And thirdly, we must legally record all that we have already in fact achieved. It is in Ukraine that the fate of democracy is decided by confronting tyranny.’

Zelensky was later pictured posing with senior Ukrainian officials and holding what was supposedly a signed letter requesting the fast-track application to NATO.

Meanwhile in Moscow, Putin vowed to protect newly annexed regions of Ukraine by ‘all available means,’ and railed at the West in a venomous speech.

The Russian president urged Kyiv to sit down for peace talks but immediately ruled out handing back occupied regions, keeping him on a collision course with the Ukrainian government and its Western backers that have rejected his illegal land-grab.

He declared that ‘millions of people’ had ‘opted’ to become vassals of Russia in sham referenda – saying they ‘are our people, forever’ to a standing ovation in the Kremlin’s grand Georgian Hall from his cronies, including Chechen warlord Ramzan Kadyrov, defence minister Sergei Shoigu and staunch ally Dmitry Medvedev.

He then turned on the West, recalling the horrors of both world wars, Korea, and Vietnam; made homophobic jibes, ranted about sex changes, and accused westerners of being ‘Satanists’; vowed ‘Western hegemony will be smashed’ and spoke of Russia’s ‘destiny’ to liberate the world.

After the signing ceremony of treaties to join Russia, Moscow-installed leaders of the occupied regions gathered around Putin and they all linked hands, before joining chants of ‘Russia! Russia!’ with the audience. 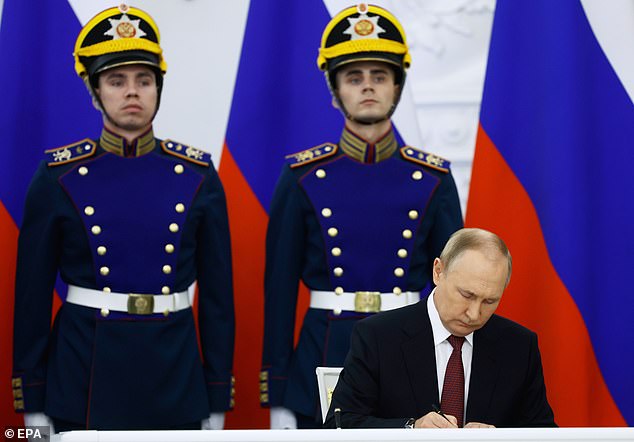 Putin officially signs a decree accepting the four occupied regions of Ukraine as new territories of Russia, paving the way for him to escalate his war against his ex-Soviet neighbour 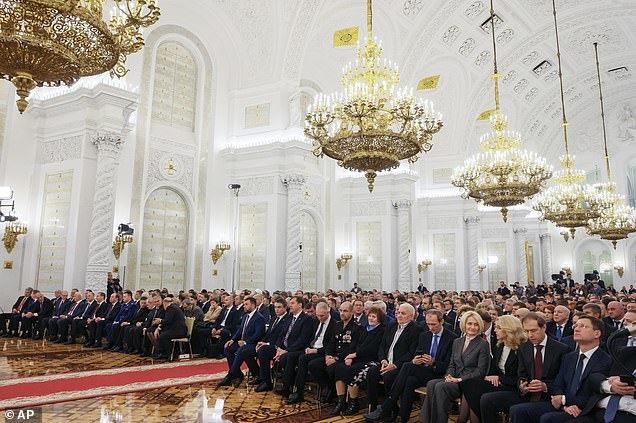 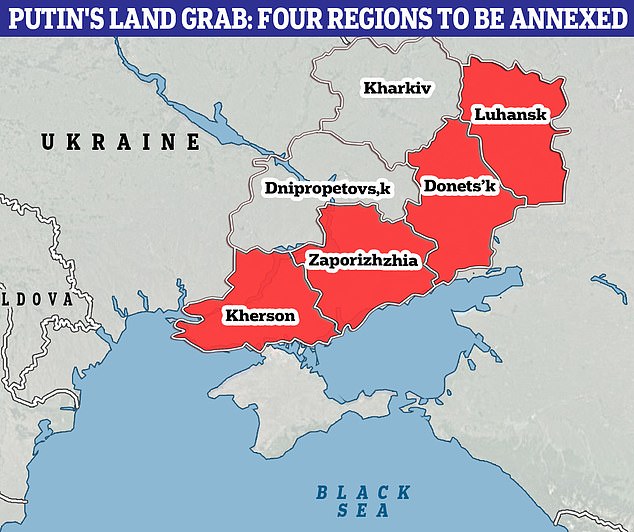 The four Ukrainian regions Putin has seized are Luhansk and Donetsk, in the east, and Zaporizhzhia and Kherson, in the south, but his armed forces are not in full control and fighting is continuing across all of them

World leaders have already spoken out against the land-grab.

US President Joe Biden said: ‘These actions have no legitimacy whatsoever. The United States will always respect the internationally recognised borders of Ukraine. We will continue to support Ukraine’s efforts to regain control over its territory, strengthening its position militarily and diplomatically.’

Italy’s new leader Georgia Meloni said that Putin ‘threatens the security of the entire European continent’, while the leaders of Poland, the Netherlands and Greece also condemned the move.

Russia is also continuing to attack the regions it now claims as part of its own country, firing a rocket at a humanitarian convoy of cars in Zaporizhzhia earlier in the day – killing at least 25 civilians and wounding 50 in the process.

The cars were heading into Russian-occupied territory to distribute aid, Ukrainian officials said.

President Zelensky branded Russia ‘bloodthirsty scum’ after the blast, adding: ‘Only complete terrorists could do this. You will definitely answer [for it]. For every lost Ukrainian life!’

Kyrylo Tymoshenko, one of Zelensky’s senior advisers, said Russia had fired a total of 16 S-300 anti-aircraft missiles at Ukrainian territory, four of which landed – destroying the queue of cars along with a nearby car market.

Harrowing images from Zaporizhzhia showed a road littered with blown-out cars and at least two bodies lying on the ground, as survivors picked their way through the rubble.

One witness reported seeing about 12 bodies, four of them in cars, and said a missile had left a crater in the ground near two lines of vehicles at a car market.